There is something rotten in modern democracies. Some underprivileged voters feel left behind, they vote for demagogues who claim to represent the ‘true people’ and then go on to become autocrats. This is what my book Death by a Thousand Cuts is about.

Fundamentally, to understand the rage by ‘those left behind’ – as they have also been called – it is important to appreciate that this is not a new phenomenon but something that has been with us as long as there has been any semblance of democratic politics. The process has always been broadly the same, an enraged group feel that they are treated with disrespect, and they elect a demagogue, who then little by little introduces an autocratic regime.

The ones who have written about it, reads like a who is who of the great minds of Western civilisation. It includes the likes of Max Weber, Plato, Hannah Arendt, Dostoevsky, and Jean-Jacques Rousseau.

The assault on Capitol Hill in January 2021, as well as other examples of white rage – often egged on by former President Donald Trump – is often seen as an example of supreme irrationality, and it is often believed that it can be countered with facts, science, and rational argument.

“It could be argued that it was too much rationality and knowledge that often led to a backlash against representative democracy and parliamentarianism.”

W.E.B Du Bois, the great African American writer, believed that “the ultimate evil was stupidity”, and that, “the cure for it was knowledge based on scientific investigation”. Yet, in many ways, it seems that the opposite is true in the cases when countries have succumbed to demagogues who have pandered to underprivileged and marginalised groups. In fact, it could be argued that it was too much rationality and knowledge that often led to a backlash against representative democracy and parliamentarianism.

Russian novelist Dostoevsky wrote about this in his novel Notes From the Underground. He was as prescient as he was perceptive when he excoriated utilitarian rationalists who believed that one day, “new economic relations will be established, all ready-made, also calculated with mathematical precision, so that all possible questions will disappear in a single instant, simply because all possible answers will have been provided”. In other words, “all human actions, it goes without saying, will then be tabulated according to laws, mathematically, like tables of logarithms…and everything will be accurately calculated and specified so that there’ll be no more actions or adventures left on earth”.

Yet, exactly when this happened, Dostoevsky predicted that there would be a backlash. The main character in the Russian writer’s Notes from the Underground, said that he, “[Would not be ] surprised in the least if suddenly, for no reason at all, in the midst of this future universal rationalism, some gentleman with an offensive, rather retrograde and derisive expression on his face were to stand up, put his hands on his hips, and declare to us all: “how about it gentlemen, what if we knock over rationalism with one swift kick for the sole purpose of sending all these logarithms to hell, so that once again we can live in accordance with our own stupid will?”

Maybe the British Conservative politician – yes it was the Conservative cabinet minister Michael Gove – who said that “people in this country have had enough of experts”, was expressing exactly this sentiment, and was “this gentleman”?

“According to Plato, pride prompts people into defying logic and following a demagogue.”

But these are perceptions not theories. Might there be a reason for this apparent obstinacy? Plato, the Greek philosopher who lived from 428-348 BC believed that he had found the answer, for the problem was as well-known in the dying days of Athenian democracy as it is in contemporary societies. According to the philosopher, pride prompts people into defying logic and following a demagogue.

Plato used the word Thymos to represent the vanity and self-pride in individuals which may lure them to listen to someone who claims to represent them. As Socrates rhetorically asked, in Plato’s Republic “when anyone thinks he is wronged, does he not instantly boil and chafe, and enlist himself on the side of what he thinks to be justice?”. While there is a part of the soul that “reasons”, there is another part “which loves, hungers and thirsts”, and which is “the ally of all indulgences and pleasures”.

In Plato’s interpretation, such cases of hurt pride caused “individuals who were thirsty not to drink”, especially when they were convinced by a demagogue that he was representing justice; and was a spokesperson for them. In the words of a more recent writer, Thymos, drives people, “to rage if others don’t recognize their worth. Sometimes it even causes them to kill over a trifle if they feel disrespected”.

Thymos can be a wonderful thing if it is channelled towards higher things. In one of his earlier dialogues, Plato suggested that this spiritness “glorifies the achievements of the past and …teaches them to future generations”. But, and this was Plato’s point, it can become destructive if citizens are animated by blind Thymos, and follow a demagogue out of spite. In these situations, Plato, concluded, Thymos would degenerate into a craze. The reason for this was that, “madness can provide relief from the greatest plagues of trouble that beset certain families because of their guilt of ancient crimes” as he wrote in his dialogue Phaedrus.

It seems difficult to understand what a proud people – one animated by Thymos – would be tempted to follow a would-be-tyrant, and the fact is, that they often fail to recognize this. Most demagogues do not set out to disestablish democracy. Those who become despots set out to be the champion of the people and then, gradually, little by little, they disestablish democracy; death by a thousand cuts. Alexander Hamilton, one of the founding fathers of the American Republic who had carefully studied the ancient philosophers and the histories of the earliest republics, was one of the most eloquent observers to note that, “A dangerous ambition…lurks behind the spurious mask of zeal for the rights of the people…History will teach us…that of those men who have overturned liberties of republics, the greatest number have begun their career by playing obsequious court to the people, commencing as demagogues and ending tyrants”.

So, the fall of democracies then occurs when a people’s pride is hurt, and when they turn to someone – ‘a strong man’ who can restore their Thymos – but who inevitably encroaches upon the power that rightfully belongs to the people and becomes a tyrant.

Why did this feeling of inferiority emerge? What caused Thymos? Plato had not answered this question. Jean-Jacques Rousseau, the great philosopher of popular sovereignty, who lived in the 18th Century provided an explanation in his book Discourse on the Origin of Inequality.

To understand why people were feeling let down and humiliated, it is necessary to understand his theory of human nature as it is in modern societies driven by ambition and capitalist competition. The Swiss-born Rousseau fundamentally lamented how the natural sympathy (pitié) and the self-preservation or self-love (l’amour de soi), which had existed in the state of nature had given way to vanity.

Vanity, or as Rousseau called it, Amour Propre, was “a relative, factitious feeling, born in society, which leads each individual to regard himself more highly than any other, which inspires in men all the evils they cause to each other”.

He decried how, “this universal desire for reputation, honours and privilege […] made men competitors and rivals, and […] how it every day causes failures, successes, and catastrophes of every kind by having so many aspirants compete in the same contest”.

What Rousseau was essentially describing was the economic system that leaves some people behind, and which places emphasis on vanity and status symbols at the expense of true values such as compassion, piety, and love. That this system has not worked was evident for him. It is perhaps even more evident today in the once prosperous industrial areas, like in the proverbial “Allentown [Pennsylvania], [where] they’re closing all the factories down”, as Billy Joel sang in the early 1980s.

All this caused resentment back then. And it still does. The result is hurt pride, as well as economic hardship. But it is the former more than the latter that has political consequences.

“Rousseau understood the reasons why many voters felt alienated, ignored, and he had real sympathy for those who, in modern parlance, were ‘left-behind’. But he wanted the people to take power back, to take back control.”

For Rousseau – like for Plato – the feeling of inferiority could lead to “the transformation of legitimate into arbitrary power [if] ambitious leaders took advantage of this situation”. (Citizens, he feared, would allow themselves to be “oppressed”, because they were “impelled by blind ambition, and fixed their eyes below rather than above themselves, and agree to wear chains in order, in turn, to impose chains on others”.

This sociology of relative deprivation, for example, might explain why some poor white Americans succumb to White rage, and vote for a demagogue, in order that they can continue to have an advantage vis-à-vis African Americans and Latinos.

Rousseau understood the reasons why many voters felt alienated, ignored, and he had real sympathy for those who, in modern parlance, were ‘left-behind’. But he wanted the people to take power back, to take back control. He did not want them to hand it on to a tyrant. Yet, the opposite has happened, the ones who felt humiliated turned to a demagogue, exactly as Rousseau feared. To address this is the task of anyone who cares about democracy and human dignity.

And how do we solve the issue? By respecting our fellow citizens, by listening to them, and by focussing on concrete policy rather than by getting stuck in divisive politics. We all have this responsibility. Get on with it! 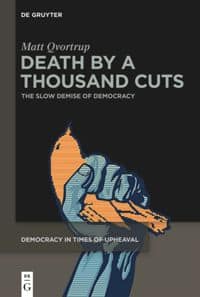 Matt QvortrupDeath by a Thousand CutsThe Slow Demise of Democracy

Matt Qvortrup is Professor of Political Science and International Relations at Coventry University and an expert in referendums, European politics and comparative government.