This article first appeared on the website of Princeton University Press.

On January 6, 2021 a violent mob numbering several thousand individuals invaded the United States Capitol Building in Washington DC, seeking not only to physically attack and even murder members of Congress but more generally to impose by force the reelection of President Donald Trump and thus to overthrow the lawfully elected American government.

Drawn by the false claim that the election had been “stolen” by the Democrats, this overwhelmingly white crowd of domestic terrorists, supported and egged on by the overwhelmingly white leadership of the Republican Party, saw itself as fighting for the American tradition of liberty against an oppressive government that threatened to impose socialism and dictatorship upon a free people. Many, including conservative firebrand Alex Jones, referred to the invasion of the Capitol building as “a 1776 moment.” As one woman shouted at the march, “We the people are not going to take it anymore…You are not going to take away our Trumpy bear. You are not going to take away our votes and our freedom.” (Reuters, January 11, 2021)

As several commentators immediately noted, the battle of the US Capitol Building had a strong racial dimension. The rioters successfully invaded it because local police forces seriously underestimated the threat and some posed little resistance to their invasion, at times even going so far as to take selfie photos with them and escort them throughout the building. This contrasted dramatically with the often violent and heavy-handed repression with which they greeted the mostly peaceful demonstrators in favor of Black Lives Matter the previous spring. The fact that few were arrested, unlike BLM demonstrators, underscored their entitlement to freedom as white men and women. Moreover, several black police officers reported being chased and called racist names by the rioters.

In addition, several participants in the insurrection prominently carried and displayed the Confederate flag, one of America’s most potent symbols of not only racism but treason. The crowd that chanted “America! America!” had no problem with adopting the banner of those who had revolted against the United States. One should also note that, for all their complaints with fictitious voter fraud, none of the rioters showed any concern at all with the very real practices of voter suppression directed overwhelmingly against communities of color by their Republican leaders. As New York Times columnist Thomas Edsall observed, “There is no question that out-and-out racism and a longing to return to the days of white supremacy were high on the list of motivations of the pro-Trump mob that ransacked the Capitol on Jan. 6.”

The rioters’ defense of freedom was thus clearly a battle for white freedom, a struggle to preserve white privilege and racial dominance over a changing nation. For many Americans, the invasion of the Capitol represented an attack on a leading national symbol of freedom by a racist mob determined to destroy it. For those involved in the invasion, in contrast, seizing the Capitol epitomized their determination to reclaim the freedoms a corrupt government, whose multicultural character often highlighted that corruption, had taken away from them. Both perspectives underscore the relationship between race and freedom, a relationship which has deep roots in the past.

My new book, White Freedom: The Racial History of an Idea, explores the relationship between whiteness and freedom in the modern era. It focuses on the two nations whose identity is most closely tied to a belief in freedom, the United States and France. White Freedom opens with a discussion of the Capitol building. Racialized views of the Capitol as a symbol of freedom did not start with the riots of January, 2021, but go back to its beginnings as an institution.

Those who built the Capitol in the late eighteenth and early nineteenth century frequently employed black slaves in all phases of its construction. A slave artisan, Philip Reid, sculpted the Statue of Liberty that stands at the summit of the Capitol to this day. The US Capitol building thus presents the paradox, so common in American history, of a great symbol of American freedom, a “Temple of Liberty”, to a significant extent built by people in bondage. It underscores how, throughout much of the history of the United States, freedom has meant white freedom. The rioters who invaded the Capitol thus in effect sought to reclaim and reassert the racialization of that building’s idea of freedom rooted in America’s slave past.

Freedom and racism have often coexisted and intersected in modern history. The eighteenth century, for example, brought on the one hand the Enlightenment and the American Revolution for liberty, and on the other the height of the trans-Atlantic slave trade. White Freedom explores these connections, challenging the classic view of them as paradoxes or contradictions. Instead, it argues that racism and freedom could exist if freedom itself was defined in racial terms: to be white was to be free, and to be free was to be white. The book traces the history of white freedom, and of the challenges to it, from the eighteenth century down to the present day. It is a fascinating story, one whose legacy, as the events of January 6, 2021 so dramatically demonstrated, remains very much with us today.

Check out this interview with Tyler Stovall in the Ideas Podcast: 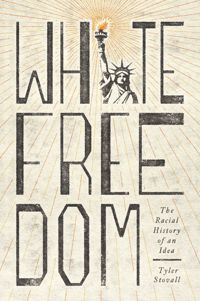 Tyler Stovall is professor of history and dean of the Graduate School of Arts and Sciences at Fordham University. His books include "Transnational France: The Modern History of a Universal Nation, Paris Noir: African Americans in the City of Light", and "The Rise of the Paris Red Belt."