This post is the prologue of the book “Corona and Work around the Globe”.

It was around 10:15 am on April 1, 2020. As on every Monday and Wednesday morning since the beginning of the spring semester, the lecture hour for Sociology 100 (Introduction to Sociology) at a public university in New York state was in full swing. Except, the campus had been in lockdown mode since the third week of March, and all classes had moved online as part of a statewide effort to stem the rising tide of COVID-19 infections.

For many of the students with homes in New York City (especially those from the relatively underprivileged boroughs of the Bronx, Queens, and Staten Island) and Long Island, this had meant returning to a far more dangerous context than the sleepy university town where the infection rates were – and would remain – comparatively insignificant. Just that morning, the number of people infected with COVID-19 had surged past 47,000 in New York City alone; while statewide figures had surpassed 83,000, with nearly 2,000 reported deaths. By the end of the semester, several students in the class would be afflicted by the virus, and a few would lose people close to them in a battle with the beast.

That morning, however, the peak of the pandemic’s first wave was still a few weeks away, and despite the increasing gloom in the air, the students – nearly two hundred in all – appeared lively and engaged. The topic was flexible labor and global migration, and the documentary (The Supermarket Slave Trail, The Guardian) they had watched in preparation for the class on the exploitation of ‘slave’ (or functionally enslaved) labor in the global shrimping industry seemed to have touched a nerve. Students – many women, non-white, and/or international students among them – seemed particularly interested in learning about the global value chains that linked the lives of severely coerced workers in other parts of the world with their own lives as consumers in the United States.

“The class was being ‘Zoom-bombed’ – a term used to refer to unwanted infiltrations of virtual meetings.”

It was at this point that two young men suddenly appeared on the screen, intervening in the conversation in a manner that seemed both insistent and oddly disjointed. At first, they were polite enough, but as the minutes passed, their tone turned increasingly sarcastic and disrespectful. Soon, it was obvious that they were intent on disrupting rather than constructively engaging with the perfectly intelligent discussion that was underway. As the confusion and tension mounted, the vigilant and tech-savvy graduate teaching assistants realized that the class was being ‘Zoom-bombed’ – a term used to refer to unwanted infiltrations of virtual meetings – and they moved swiftly to expel the two intruders.

Despite being rattled, the class began to regroup and focus collectively on salvaging the discussion. However, a few minutes later it was disrupted once again – this time by a posse of six or seven young men sporting masks and other disguises conjuring up images of the Islamic State. To the utter shock and bewilderment of everyone present, they shouted obscenities and Allah hu Akbar in the same breath, made barking noises, smeared racist and pornographic content across the screen and, most egregiously, invited female students and the professor alike to partake in sexual acts.

The teaching assistants once again swung into action, but this time it proved well-nigh impossible to expel the intruders, because they had hijacked the names of students – specifically non-white students – who were in the class. A few minutes into this mayhem, the professor was left with no choice but to abandon the class for the day. Indeed, eventually all synchronous Zoom meetings for the course were cancelled for the rest of the semester in the absence of guaranteed, credible protection against further attacks from the university administration, already struggling with the sudden fallout from the pandemic lockdown.

In the aftermath of this deeply disturbing incident – described by students and teaching assistants alike as “traumatic” – reports surfaced about the Zoom-bombing of two other classes on campus that week: Social-Cultural Anthropology and African-American Literature. The three affected courses share important commonalities: as broad introductory courses that critically examine social structures such as race, class, gender, sexuality, culture, and religion in a global/national context, they draw students from diverse backgrounds.

“The fact that the intruders singled out women and/or non-white students for racist and misogynist gibes further points toward a supremacist politics of intimidation motivating these specific disruptions.”

The specific targeting of these courses suggests that this was no mindless prank by students breaking into a class for a bit of juvenile fun. Rather, as a number of the students and teaching assistants later observed, this was an “organized, preplanned, and coordinated action.” The fact that the intruders singled out women and/or non-white students for racist and misogynist gibes further points toward a supremacist politics of intimidation motivating these specific disruptions. Indeed, reports emerging from universities across the United States around this time would seem to support these suspicions. Apparently, the two young men who appeared first as hecklers in the incident described above were known entities with possible links to white supremacist groups on the FBI’s radar.

Nine months into the COVID-19 pandemic, it is clear that the impact of the crisis on human life and livelihoods is – and will likely continue to be – colossal. And while the virus – dubbed the “great equalizer” – does not seem to discriminate in its choice of victims, the severity of its afflictions is in fact far from equal, with particularly devastating consequences for underprivileged communities across the world. The pandemic has also ushered in profound and likely irreversible transformations in the world of work. Even as essential workers, represented overwhelming by black, latinx, and poor (im)migrant labor, are compelled to toil in dangerous conditions on farms, in food processing factories, hospitals, and in transportation, others are forced into workspaces that range from the near dystopic for those who live alone, to a daily struggle for quiet for those who live with families, sometimes in small spaces.

A university campus, with the many different forms of work that it supports, can be seen as a microcosm of sorts for the world of work at large. The particular story of disruption in one class at a public university in an ethno-racially super-diverse state such as New York indexes many of these troubling questions that the COVID-19 crisis throws up. Let me highlight a few.

There is no doubt that the pandemic has delivered a massive fillip to ideas of distance learning and virtual conferencing that have been on the horizon for some time now. Much of the discussion about the transition to a virtual world of conferencing, teaching, and learning, spearheaded by tech companies that stand to make windfall profits from it, tends to be celebratory. However, virtual learning and working online offer no ready panacea.

The experiences of students mentioned above spotlight some enduring structural problems – beyond the disproportionately pernicious effects of Zoom-bombing on some (women/students of color) as related above. For instance, not all students have the kind of space at home that supports uninterrupted class attendance. Many lack access to stable internet connections, while some are obliged to share a single computer with multiple working members of the household. But perhaps more than anything else, the pandemic-induced social distancing invites us to recognize anew the significance of campus life as a crucial social site for the complex, sometimes fraught, and lifelong process of learning.

Some faculty members – those who have secure positions that have not been eliminated due to the pandemic – have undoubtedly come to appreciate the flexibility of teaching online asynchronously while living elsewhere. For many others, however, the loss of frequent human contact with colleagues and students, the (not always necessary but pleasurable) forays into the library, the possibility of learning from casual exchanges in the corridors, or after the occasional film or concert or other academic/artistic events – things that make university campuses so different from other sites of employment – have been disorienting, to say the least.

“Cues that add depth, meaning, and texture to communication, so central to intellectual labor in all its iterations, are flattened, virtually.”

Perhaps more than anything else, what has really transformed the experience of teaching as a profession is the loss of the ever-so-delicate affective dimensions of pedagogy in physical classrooms. The imperceptible nods, the light (or confusion) in the eyes of students as they comprehend something (or not), the satisfaction (or frustration) of succeeding (or failing) to get a point across, and the inevitable milling around after lectures when the more shy or differentially able students haltingly articulate their questions – all such cues that add depth, meaning, and texture to communication, so central to intellectual labor in all its iterations, are flattened, virtually.

Beyond the immediate experience of teaching on campus, there are other structural ramifications on the horizon for the world of academic work. The standardized 40/40/20 (research/teaching/service) model that has defined employment contracts of tenured faculty in many institutions across the world has been under pressure for some time. Now, as the pandemic threatens to shrink overall funding for both research and casual teaching jobs – disproportionately affecting early-career academics who depend on them – the familiar models of employment relations in academia may well be a casualty in the near future.

The immediate and daunting task facing instructors across the world, however, is of reinventing pedagogical tools to make them consistent with the demands of virtual classrooms. So, for now, we grapple with online platforms and PowerPoint presentations, on shared screens dotted with one-inch-square student/speaker slots, carrying faces and names that can be hijacked by ever novel forms of cyber aggression. 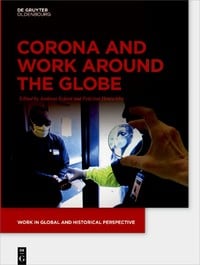 Andreas Eckert and Felicitas Hentschke (eds.)Corona and Work around the GlobeSeries: Work in Global and Historical Perspective, 11

Mahua Sarkar is Professor of Sociology at Binghamton University, New York. She was a research fellow at re:work/Humboldt-Universität zu Berlin from 2011 to 2012. She is one of the editors of the book series Work in Global and Historical Perspective.