In 2014, the New York Times published an article entitled “What’s Lost as Handwriting Fades?”. The question in the headline raises several follow-up questions: Is it even true that handwriting is disappearing? That soon we will only be typing? Can’t it be argued that different contexts exist in which we use one practice or the other?

Of course, it’s true that there are ever fewer situations that require “old-school” handwriting. However, that does not change the fact that we do still write by hand and that to this day, despite all prophecies of doom (at least in the headlines), in school, children first learn to write by hand.

What do we even mean by handwriting? Traditionally, handwriting has been understood as writing with the help of an instrument such as a pen, on a material surface, most commonly paper. But what about the use of digital tools that allow us to write by hand on devices such as smartphones and tablets?

“Handwriting and typed text actually exist on a continuum, rather than being diametrically opposed to one another.”

Today, we so often interact with touchscreens, whether typing on virtual keyboards or using special pens as writing tools. When these means are employed, the traditionally analogue practice of handwriting becomes decidedly digital.

Against this backdrop, it’s worth mentioning two emerging trends that do not concern the writing process but the product of writing, meaning the resulting text: fonts that mimic the appearance of handwriting, and handwriting (or hand lettering) that imitates typed letters (see examples below).

Examples like these suggest that handwriting and typed text actually exist on a continuum, rather than being diametrically opposed to one another. In fact, nowadays, as the possibilities in font design abound, it is sometimes impossible to tell whether a text was handwritten or typed.

Handwriting “is alive and healthy”

Let’s look more closely at one end of this continuum: analogue handwriting. Steve Graham (from whom the quote above is taken) argues that, while pen and paper remain inexpensive, transportable, and handy, handwriting is still very much alive. This proves especially relevant in regions of the world where new technologies are still unaffordable to most people and digitization is slow. But as Graham also points out, handwriting is finding new life in the digital realm.

That said, experts expect traditional handwriting to survive in several domains. One is notetaking, where writers are usually less concerned with accuracy than with speed, and often make use of the spatial possibilities afforded by the two-dimensional writing surface (by drawing mind maps, shapes, tables, and so on). Another is the personal signature, which will likely remain the safest way of authenticating proof of identity.

“The decision to write by hand alone can reveal valuable information about a communicative situation.”

Yet it is also true that in many literate societies, handwriting has become a “marked” choice for special purposes of written communication. The decision to write by hand alone can reveal valuable information about a communicative situation, including the purpose of a text or the relationship between those involved, who are known as the “sender” and the “receiver” in communication theory. This makes handwriting all the more interesting as an object of research.

Yet there has been strikingly little research on handwriting in linguistics. Typography, by contrast, has been much better researched, and there are numerous studies describing the various communicative functions typography assumes (see the image below for an example) or the role it plays in reading processes. The same questions, however, are also relevant to handwriting.

Take, for example, the following much-debated questions about the act of writing by hand: does it benefit motor skills and cognitive processes? How does it affect the way we read? What unique means of expression does writing by hand afford, especially when compared to typing? Handwritten text, for example, can be underlined, written in all caps, or with a pen of a different colour, but typography allows far greater variation in the appearance of text, and seemingly infinite choices of presentation.

Over the course of the last decades, the study of writing has gradually increased in popularity, resulting in the emergence of a discipline we refer to as grapholinguistics. It is an interdisciplinary field focused on the study of all aspects of writing that incorporates, among others, theoretical, historical, pedagogical, sociolinguistic, and psycholinguistic perspectives.

Until now, there has been no work in which all aspects of this broad subject area have been presented. We aspired to change this with our monograph Writing Systems and their Use: An Overview of Grapholinguistics, which also contains a section on the “materialisation(s) of writing” with much more information about handwriting and typography.

Finally, we would like to close with the opening sentence from our book: “Writing is a cultural technology that has changed humankind by shaping the way we think and the way we communicate. The role it plays in our everyday lives in most modern societies is so vital that it is almost impossible to overstate its relevance.” 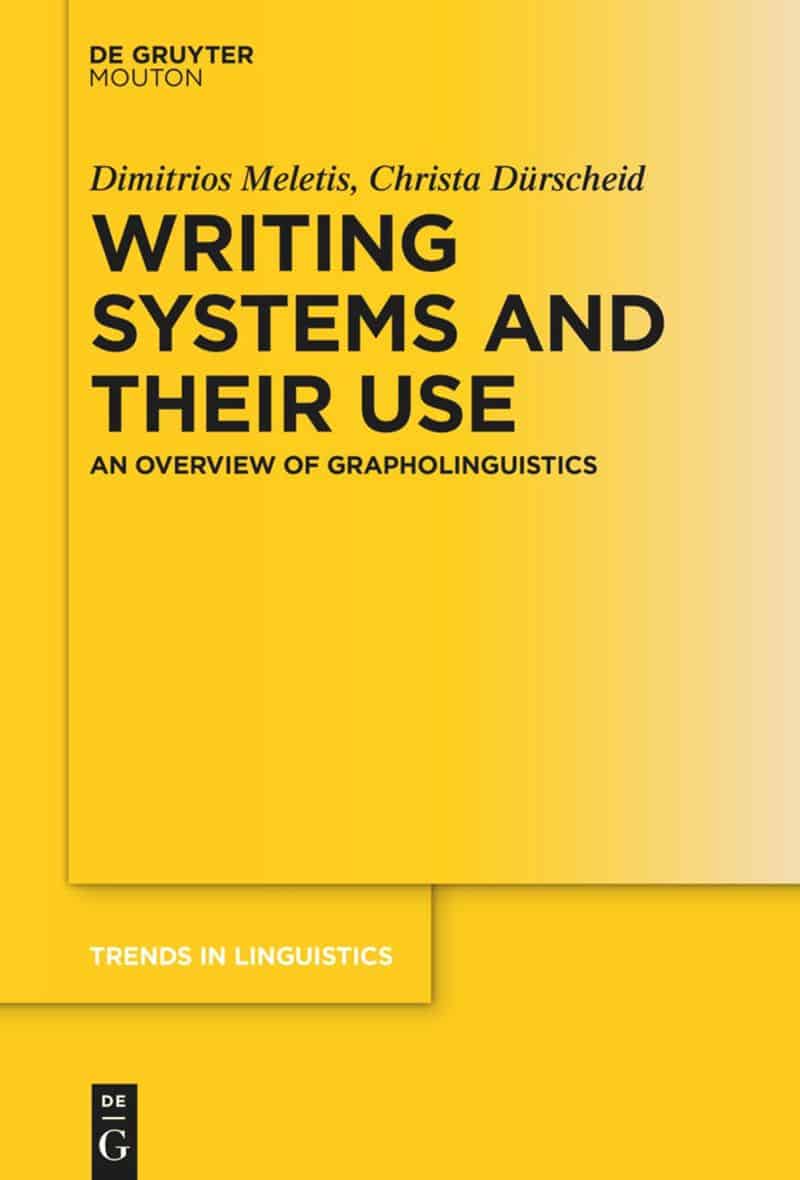 [Title Image by Infralist.com via Unsplash]

Dimitrios Meletis is a linguist and postdoc researcher at the University of Zurich. His main research topics are the structure and sociolinguistics of writing systems as well as linguistic normativity.

Christa Dürscheid is a linguist and professor at the University of Zurich, Switzerland. Her main research topics are variation linguistics, language didactics, grammar, and computer mediated communication.