The medium we use affects the message we want to convey. That is why you probably would not end a romantic relationship with a text message, and it would be a bit strange to send a handwritten letter to your boss to tell her you are taking a day off sick.

Yet it doesn’t end there. The influence that the medium has over the messages we send has spread well beyond the confines of a few lines of text, and it is having a profound impact on the way we communicate as a society.

The third millennium started in a period of curiosity and excitement about the many new technologies entering our everyday lives. Mobile phones were becoming increasingly widespread, and SMS messages offered an entirely new form of communication.

“Digital media has become so crucial to our communication that it has created a new type of language.”

One person following this evolution closely is Ágnes Veszelszki, Associate Professor in communication and Hungarian linguistics at the Corvinus University in Budapest, Hungary. Digital media has become so crucial to our communication that it has created a new type of language. Veszelszki calls this “digilect”, and she defines and analyzes it in a new book that goes by the same title and looks at just how much our language has been changed by digital media.

“Digilect is the language variety (type) of digital media, which is typically used during communication taking place on computers or other digital devices,” Veszelszki explains. “It has many special characteristics in terms of form, spelling, grammar, and style.” For her book, Veszelszki indexed these characteristics based on findings from two surveys and several analyses of digital, handwritten, and printed texts, offering a wealth of linguistics innovations in English, German, and Hungarian.

The use of emoticons—spelling variants and writing in a style similar to spoken language—is central to digilect. “But the most striking innovations relate to vocabulary,” Veszelszki says. “For example, many new abbreviations and Internet-specific acronyms are used for simplification and time-saving purposes.” Now that written communication is taking over from oral communication—who has not been guilty of shooting an email to a colleague sitting on the other side of the room to avoid having to walk over—we cannot afford to lose too much of our time on crafting messages.

“Who has not been guilty of shooting an email to a colleague sitting on the other side of the room to avoid having to walk over?”

As a result, many neologisms, or “netologisms”, have sprung from the Web, some of which have become commonplace in all layers of society and all manner of communications. Words like “hashtag”, “troll”, “meme”, and “like” had completely different meanings in the previous century. Abbreviations like “omg” (oh my god) and gesture-describing expressions such as “facepalm” were just gibberish. The English language has inspired many netologism in Hungarian, and presumably in other languages too. The word “hack”, for example, is “hekkel” and “like” is “lájkol”. This may be because English dominates the online world, though another possible explanation is that it adds a layer of prestige.

From the virtual to the analog

Digilect is most notable in online communication, specifically in instant messaging conversations and on social media sites like Twitter and Facebook. Especially the latter platform has an important influence on our public and private conversations. “Just think about it: Facebook is still showing a growing trend with nearly half a million new users registering each day,” Veszelszki says. “Every six seconds, six new Facebook profiles are created.”

However, Veszelszki also found that these linguistic innovations have begun to influence the way teenagers formulate messages when they write by hand. Interestingly, when she asked them to fill in a paper questionnaire about their language use, “it was an unexpected outcome that the answers to open-ended questions included many digilectic forms, like abbreviations and smileys. Interestingly, they wrote smileys as if typed on a keyboard and not rotated by 90 degrees to better represent the human face.” To illustrate, they wrote ‘:-)’ or ‘XD’ instead of ‘☺’.

“I was interested to learn whether the new abbreviations invented in digital communication also have an impact on note-taking. The answer is a clear yes.”

Veszelszki delved deeper into this and collected a corpus of student handbooks to investigate the handwritten notes in the margins that students write to converse during class. “I was interested to learn whether the new abbreviations invented in digital communication also have an impact on note-taking. The answer is a clear yes,” says Veszelszki.

Additionally, Veszelszki also found examples of digilect in spoken language, such as those in made-up quotes like this one: “Oh em gee, I lol’d so hard!” (fans of the Kardashian family may be familiar with these). Respondents to her survey said they had used abbreviations like “asap” and “brb” in conversations, as well as the netologisms “lájkol” (“like”) and “lávol”, which means “love” and was inspired by the pronunciation of that English word.

Post-Literacy: Back to an oral culture?

Veszelszki thinks the evolution of digilect can help offset the constraints that literacy imposes on society. “Some say that the emergence of literacy became a barrier between people, as literate societies lack the spontaneity of orality, and therefore people living in literacy-based cultures have separated from each other both psychologically and emotionally. Today, however, orality seems to have gained ground against literacy, so these ‘values’ are making their way back to society.”

In the post-literacy world of today, literacy has lost its absolute power in favor of spontaneous discourse, which is characterized by immediacy, emotional directness, and vitality. “Planned communication is no longer considered ideal, not even in literature,” notes Veszelszki. An example of this is the cell phone novel, a literary format particularly popular in Japan and China, which is made up of short chapters sent to subscribers via e-mail or SMS message.

Most speakers of digilect are from younger generations, so it is easy to assume that it is therefore a form of slang that youths will stop using as they grow older and adopt a more formal communication style. However, that is not how Veszelszki sees it. “Digilect is not only used by young people, but by everyone using computer-mediated communication. My research suggests that people from older generations who regularly use the Internet for work or play can also be fluent in the language variety of digital communication.” The fact that so many youths seem to be using this language variety might then simply be because younger generations are better versed in using computers and navigating the online world.

“Digilect is not only used by young people, but by everyone using computer-mediated communication.”

That does not take away the fact that today, many adults will not understand so-called digital natives talking online, or among themselves. This has important educational implications. “For adults dealing with children, it can be useful to be open to their communication style,” Veszelszki says. “This does not mean that they should talk and write like children, but they should at least know about the online content in which children are interested. Education should be better prepared—in terms of methods, tools, and content—for students who use digital technology day and night and sometimes know better than their teachers. It should teach them about the different forms of communication and the registers linked to them.”

It is difficult to predict how these language variations will continue to evolve, as technologies change so quickly that you can never know which new platform will arrive next. In fact, some innovations have already started dying out.

When everyone was still sending SMS messages, the character limitation inspired creative abbreviations, many of which quickly became widespread. Now that such boundaries no longer exist on instant messaging apps, that evolution has been at least partly turned around. What is more, word prediction functionalities can even cause us to write words in full and force us to use correct spellings and sentence capitalization.

Veszelszki prefers, then, to catalog these changes in our language, so that they might be remembered by future generations.

“Perhaps, in a way, this book was the last opportunity to ask, ‘How has the Internet changed language?’” she says. “Some people can no longer imagine life without the Internet; many seem unable to recall how they used to think before the Internet era. For those born in the golden age of the Internet and digital technology, this question is hardly understandable as they have no basis for comparison with the pre-Internet era.”

Maybe one day, they can find out in a Museum of Analog Communication. 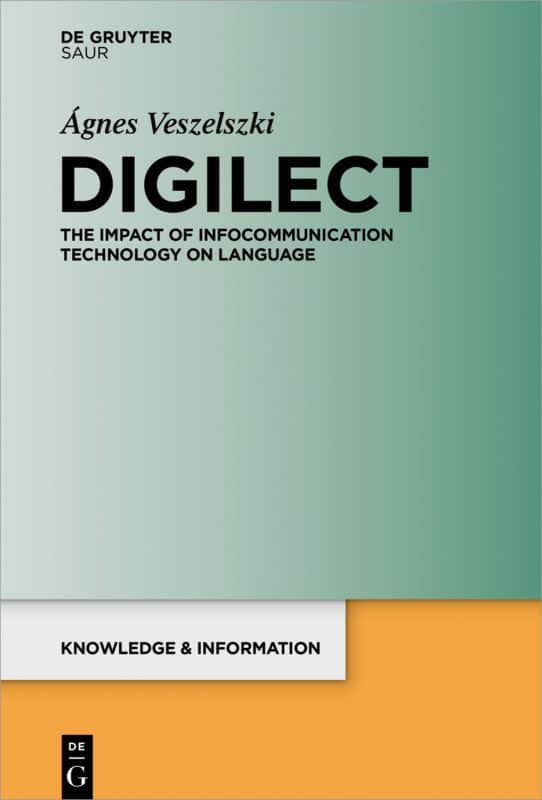 [Title Image by RyanJLane via GettyImages]

Elisa Nelissen is a writer and editor based in Leiden, The Netherlands, working with, among others, SciencePOD. She graduated with a degree in Book and Digital Media Studies and is interested in uncovering the hidden mechanisms that govern everyday life, specifically in media, technology, the environment, culture, and identity.