Ever since the inception of the Olympic Games, language and communication have played a central role. The Ancient Grecian Olympics (776 B.C. – 393 A.D.) were monolingual events as they allowed only free men who spoke Greek to participate in the Games. The modern Olympic Games (held since 1896), however, are linguistically complex events due to the increasing number of participants of diverse backgrounds, which has brought communication challenges to host cities.

In recent decades, some 10,000 athletes from over 200 countries, accompanied by a similar number of coaches and officials, tens of thousands of journalists and hundreds of thousands of spectators, have gathered every four years for more than two weeks to participate in, report on, and watch the world sports event. Given the grand scale of the Modern Olympic Games and the linguistic diversity of competing nations, Olympic organisers need to make important language planning decisions to build an environment, which allows athletes and visitors to communicate effectively.

At present, the official language policy of the International Olympic Committee (IOC) is European language-centric multilingualism. Article 18 of the 1985 edition of the Olympic Charter stipulates that the official languages of the IOC are French and English, with French prevailing in the occasion of any divergence between the texts of the Charter and other IOC documents. Along with French and English, the Charter also features Arabic, German, Russian, and Spanish as ‘working languages’ of the Olympic Games. So, simultaneous interpretation must be provided into French, English, German, Spanish, Russian, and Arabic at all sessions during the Games.

“There exists a big gap between official language policies of the International Olympic Committee and actual language service needs at the Games.”

This language policy has continued to the present day. Despite the fact that the Olympic Charter sees the enjoyment of the rights and freedoms without discrimination of any kind as a fundamental principle of Olympism, the IOC does not grant equal standing to languages of all member states in the Olympic Movement they lead. In reality, there exists a big gap between official language policies of the IOC and actual language service needs at the Games, which has posed great challenges to Olympic organisers. Due to the diversified and multifaceted communicative needs of the Games, many host countries have gone beyond the minimum requirement of the Olympic Charter and successfully staged multilingual Games.

Compared with many host countries in the West, where the national language is one of the official IOC languages (French and English), Asian host countries have to make greater efforts in bridging the language gap than their Western counterparts. The Beijing 2008 Olympic Games, for example, gave great impetus for the spread of English in Beijing and the rest of China through an English-centric foreign language popularisation campaign. However, English alone cannot meet the communication needs of multilingual populations at sports mega-events. In fact, Beijing was short of advanced English speakers, multilingual speakers, and speakers of foreign languages other than English during the 2008 Summer Olympics.

Since Beijing 2008, China has been ramping up its multilingual capabilities beyond English and the types of foreign language programs in China’s higher education have increased from 44 to 101. In addition, progress has been made in technology-mediated multilingual services in China. Intelligent language technologies will play an important role in language services for the 2022 Winter Olympic Games, also to be hosted in Beijing. In those games, we will see how far China has really come with their multilinguist development.

Communication in Time of Crisis

Apart from offering sufficient languages and advanced services, the contemporary Olympic Games are confronted with the challenge of crisis communication. The Tokyo 2020 Olympic Games is the second of three consecutive Olympic Games to be held in East Asia. After a one-year postponement due to the COVID-19 pandemic, the Games began on 23 July and will go on until 8th August 2021. Then, the Paralympics will take place from 24th August to 5th September.

Tokyo 2020 will be an Olympics like no other: held during a pandemic without international spectators, and extravagant celebrations replaced by strict COVID-19 countermeasures. Hosting the event amid a pandemic means that ensuring the safety of all Games participants and the Japanese population is a top priority of Tokyo Olympic organisers. Existing studies have demonstrated that the availability of timely and effective multilingual communication is vital to crisis preparation and management. The question that remains is: Is Tokyo ready for the Olympics in time of crisis?

In order to guarantee a ‘safe and successful Olympic Games’, Tokyo Olympic organisers launched the Tokyo 2020 Playbooks in English, French, and Spanish. The Playbooks outline the responsibilities of all Games participants and the countermeasures that must be followed. A free and confidential mental well-being support helpline will be available 24 hours a day and in over 70 languages. It serves to ensure support for competitors who will certainly spend more time alone than in previous Games. In addition, more than 100 professional interpreters will be onsite to offer interpretation services in 11 languages.

The emergency circumstances during the pandemic also prompted the development of multilingual intelligent services. In order to prevent the spread of virus, the Japanese government requires all visitors to install two smartphone applications (apps): OCHA and COCOA. OCHA will support entry to Japan, procedures of quarantine, immigration and customs, as well as daily health reporting. Additionally, COCOA will support contact tracing in case of individuals having close contact with somebody who has COVID-19. These two apps provide six language options: English, Japanese, French, Chinese, Spanish, and Korean. Another app, the Omotenashi Guide, will provide updates on competitions as well as security and emergency information in seven languages and is also accessible for people with hearing and vision impairments.

In addition, researchers from the Nara Institute of Science and Technology have been working on a lag-free interpretation system and app to instantaneously translate the Games’ Japanese commentary into 27 languages. These technological innovations in multilingual services are part of Tokyo 2020’s efforts to promote the Games’ vision of diversity and inclusion. However, the effectiveness of these measures has yet to be tested in the 14-day event, and in the Paralympics.

“Multilingual services are not just essential for smooth running games, they are now a requisite for public health.”

The COVID-19 pandemic has placed higher requirements for multilingual services on international organisations and state governments. Multilingual services are not just essential for smooth running games, they are now a requisite for public health. English-centric multilingual policies of many supernational organisations and state governments may result in the exclusion of linguistic minorities from fair and equitable access to timely and essential information. Only time will tell whether Tokyo 2020 has been a success or failure for multilingual communication, and if it had an effect on infection levels in Japan.

In the future, both the IOC and host countries need to bridge the gap between language policy and language practice, and promote effective and equitable communication between people of diverse linguistic backgrounds. 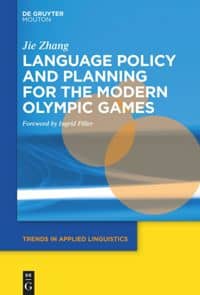 Jie ZhangLanguage Policy and Planning for the Modern Olympic GamesVol. 7 in the series Trends in Applied Linguistics [TAL]

Jie Zhang is Associate Professor in the School of Foreign Languages, Zhongnan University of Economics and Law, Wuhan, China. She obtained her PhD degree from the Department of Linguistics, Macquarie University, Australia. Her research interests focus on language policy and planning and foreign language education. You can follow her on Language on the Move.