De Gruyter: How did you become a linguist?

“Studying two languages in a parallel way and seeing that rules are very similar and still there are differences, forces you to think how grammar works.”

Chiara Gianollo: I was at school. In our high school system in Italy you start learning Latin and ancient Greek quite early, when you are 14, and you study them for five years.

Studying these two languages in a parallel way and seeing that rules are very similar and still there are differences forces you to think how grammar works. It’s not just your language, but it’s many languages you’re comparing. I am pretty sure that’s what started me, so that’s how I got here in the end.

Chiara Gianollo: The latest project (with Mouton) dates back to 2015. It was a thematic volume on language change that I edited together with two colleagues, Agnes Jaeger and Doris Pinker. Not only dead languages but also languages that are well alive today change every day. So we wanted to investigate in particular the kind of change that happens. The title is Language Change at the Syntax Semantics Interface, so the question is really what happens in the meaning that makes the structure change – or if there is also something happening in the structure that forces you to reanalyze the meaning somehow.

We had plenty of authors working with us for these thematic volumes from very different languages, from ancient Sanskrit to Greek to some Native American languages. It was really exciting to hear how this all comes together; how the questions that are raised and the answers that are proposed go in the same direction.

Chiara Gianollo: Well, in the end everything comes from society and from interaction. The challenge for us working on very ancient languages is of course to reconstruct this scenario, because we see this happening every day.

We are actually very interested in research on second language acquisition, on contact migration, because this is the kind of setting that is really crucial for those changes to happen. But what was happening in ancient Greece or what was happening in the Roman Empire is really difficult to reconstruct. There are fascinating attempts to do that, but in the end we have to base ourselves on texts. Many of them are literary texts that give you another insight. Maybe they tell you little about how real language change proceeded in society, but they show you another aspect: the pressure of communication.

People want to catch other people’s attention, right? When you speak, you want someone to listen to you and to catch what you are saying. There are many signals that people are giving to do that. If you negate something, you might say, “I don’t want this”, but you can also say, “I absolutely don’t want this”, and you are catching more attention this way. This is what makes the grammar of negation change towards a new system. This pressure to catch attention is something very important for language change.

De Gruyter Mouton: Do you think linguistic research can help tackle some of the big challenges in our societies today?

Chiara Gianollo: I really think linguistics is very important. It should find a very clear place at school for instance. At this conference, there is a special panel about grammar and linguistics in schools.

Of course, I cannot deny that we spend most of our time doing formulas and trees. Reconstruction is not something that has a direct impact on society. But exactly those questions we were discussing earlier about language change, the dynamics of communication, are really something that can be useful. They have to be transmitted in a proper way for people to understand the reasons of how important it is to have many languages in their own life and in society, and to find a way to cope with the multilingualism in a way that is productive for everyone.

For instance, many of us, even people who used to work on more theoretical aspects, are now really driven to do research on migration and second language acquisition – just because we recognize the more abstract problems we are dealing with in what is happening now in society. We think that linguistics is really a way to show that being “mixed” can be nice, can be interesting, and can really also favor interpersonal communication, because you have to relativize everything. You are not just thinking in your own language, but you have to take into account that there are many other languages. I think this is really the most important impact linguists can have.

I also think especially doing historical linguistics shows you that there was never a state of purity or of individuality, but all languages are born creole somehow, are born through mixture. And they keep mixing, despite the fact that i.e. today we can reconstruct a wonderful genealogical tree for languages, so we know where they come from for many of them – not for all of them – and of course linguistic evidence meshes well with genetic evidence. Of course, people have their own languages, but they kept sharing languages, changing them according to their environment, all the time. So really, linguistics is one of those sciences that will tell you there was no previous stage where we were alone and isolated and everything was beautiful. It has always been mixed.

What is a rule today, used to be an exception yesterday, so language change often goes unnoticed. Many little structural changes that many things speakers don’t notice.

But you were talking about words. The lexicon, our treasure of words, is something that is really visible and that people have control on. In this case, there has always been a lot of pressure to keep things as they were and to have a proper way of talking. Of course, its standardization processes are very important. There has to be a norm, because this is what happens anyway, so it is good to have a code to teach to other people for instance. But at the same time, if you see it historically, you will see that what you are defending today used to be horrible things for grammarians 200 years ago. So in the end, really, it’s all in flux.

Chiara Gianollo: Well, I think given my love for dead languages I have to answer yes and that is Latin for sure.

De Gruyter Mouton: What do you like about Latin?

Chiara Gianollo: Of course, for an Italian-speaking person, for a Romance-speaking person, it’s the root. It is very different of course, but it’s still very interesting for me to find back in Latin parts of what I use today to express myself. Also, I have to say, I love the literature, that’s what brought me to the language, not the other way around…and it’s a cool language! 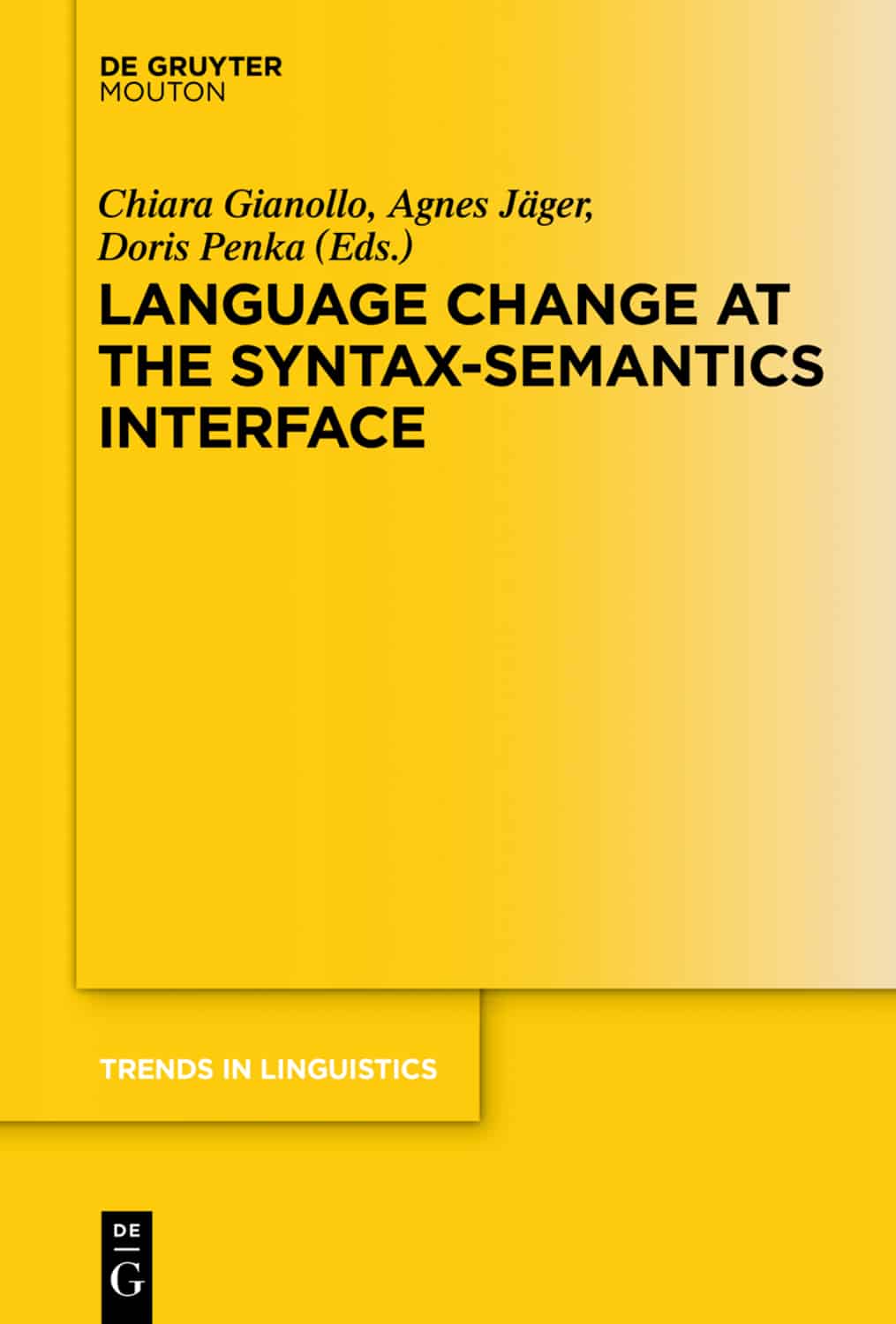