For as long as I can remember, I’ve been passionate about video games. I’ve played them since I was a small child, and I can remember the excitement I felt at being able to play as characters like Princess Peach in Super Mario Bros 2 (1988), Chun Li in Street Fighter II (SNES version, 1992), and Dixie Kong in Donkey Kong Country 2: Diddy’s Kong Quest (1995) and Donkey Kong Country 3: Dixie Kong’s Double Trouble! (1996) — characters that I could see myself in.

As a woman who was born in the late 1980s and has been playing video games most of my life, I’ve always kept up with recent releases and game news. I planned large assignments around game releases during high school and undergraduate, I budgeted carefully to play World of Warcraft (2004), I camped out in below freezing temperatures for the Nintendo Wii (2006), and I worked for a time in a video game retail store. I currently co-host a podcast that focuses on video games, anime, and manga. I regularly put hundreds of hours into Japanese Role-Playing Games (JRPGs).

Despite all of this, I don’t call myself a “Gamer.” The term is loaded in a way that is extremely related to gender and video game culture.

The Rise of Toxic Gaming

In 2012, I chose to start researching video game history, focusing on video games and gender primarily in the 1970s and 1980s. Gender has always been relevant to me as a person who plays games and identifies as a woman, and I wanted to research how gender related to the industry before I started playing games (or was alive, for that matter). I wrote my master’s thesis on the topic, then I started a PhD program with plans to continue this research in 2013. However, the culture of video games took a dark turn in 2014.

In August 2014, an internet-driven crusade called #Gamergate began, and while many claimed it was about “ethics in video game journalism,” what it actually led to was the horrific harassment of women and people who identify as nonbinary who either made or discussed video games. There were accusations that people who didn’t even play video games were out to ruin them for those who did.

In the same month, journalist Leigh Alexander wrote a piece for Gamasutra entitled “‘Gamers’ Don’t Have to be Your Audience. ‘Gamers’ are over.” Alexander writes about young white men and how game marketers considered them the target audience:

“Suddenly a generation of lonely basement kids had marketers whispering in their ears that they were the most important commercial demographic of all time. Suddenly they started wearing shiny blouses and pinning bikini babes onto everything they made, started making games that sold the promise of high-octane masculinity to kids just like them. By the turn of the millennium those were games’ only main cultural signposts: Have money. Have women. Get a gun and then a bigger gun. Be an outcast. Celebrate that. Defeat anyone who threatens you. You don’t need cultural references. You don’t need anything but gaming.”

The term “Gamer” is tied to this image of young white men, hypermasculinity, and the sexualization and now mistreatment of women. It’s an identity that many in the toxic video game culture wear with pride. There are “Gamers,” and then there are the “others” that they think are trying to change the hobby that defines them.

Why I Don’t Call Myself a “Gamer”

I am a woman who plays video games regularly and devotes a lot of time and energy into them. I am also a woman video game history scholar who focuses on gender relations in the industry. There is a real fear that goes along with that as a research topic in the post-Gamergate era.

I’ve personally experienced pushback against my research from some who think I am not invested in video games and want to make the industry or prominent historical figures of gaming look bad — to the point that I had anxiety every time I got a new notification or follower on Twitter for several months. I have been fighting with Reddit for the better part of 2020 to get a post that targeted me taken down. My harassment was relatively short-lived and tame, and other scholars have also run into issues with researching the topic. “Gamers” distrust academics studying anything related to video games and gender.

“Refusing to adopt the identity of ‘Gamer’ acknowledges the toxicity of the culture of video games, historically and currently.”

I think it is important to be critical of the media you love and consume. Choosing to research video game history allowed me to critically examine the industry, its beginnings, and how gender dynamics became entrenched in video games and their development. I am still passionate about video games and continue to play them as much as I can. Video games have been extremely meaningful for me in many ways, including meeting some of my closest friends, but refusing to adopt the identity of “Gamer” acknowledges the toxicity of the culture of video games, historically and currently. 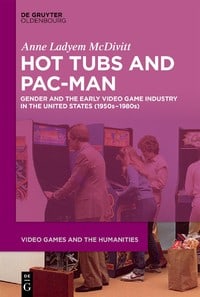 Anne Ladyem McDivitt is the Digital Humanities Librarian for the University of Alabama Libraries and the author of “Hot Tubs and Pac-Man: Gender and the Early Video Game Industry in the United States 1950s-1980s”. In her free time, she plays video games and co-hosts a podcast about video games, anime, and manga. You can follow her on Twitter or on her blog.