In years to come students of leadership are certain to spend hours studying the way that Volodymyr Zelensky has led his country’s response to foreign aggression. But, in the interim, I would suggest that there are lessons for all leaders in the ways in which humanitarian practitioners and policy makers have met this crisis.

Like every war before it, and like every war that there will be, Putin’s assault on Ukraine has unleashed a humanitarian catastrophe. The “dogs of war” have been let slip and already ended the lives of thousands and forced thousands more from their homes.

At a meeting in London’s Czech embassy a few weeks ago, I listened to people who have been responding directly to this crisis. Some were humanitarian professionals already used to organising resources to meet the basic material needs of the war-afflicted. Others worked for organisations that, before the war, had little to do with emergency responses. But, because of their links with Ukraine, they have found that they have been asked to step up.

One of the speakers, a leader of a Ukrainian cultural organisation, described how her work now involved trying to obtain asylum for refugees and organising relief supplies for those still in central Europe. It was a long way from promoting the language and literature of Ukraine.

Over the years, I have talked to leaders across the world who have had to face similar challenges and find in themselves what is necessary to meet the moment. Often this takes them to uncomfortable, sometimes dangerous, places outside the routine of what they thought their work roles were.

What the most effective such leaders do, like those responding to the Ukraine crisis, is to take personal responsibility for making their corner of the world a better place, irrespective of what challenges the circumstances throw at them.

Humanitarian crises always present matters which seem difficult or intractable, even to the experienced. For example, since before Troy, slavery has been an intrinsic part of war. This is because, as Ukraine has shown, war rips away the protections that millions of ordinary people depend upon for their safety and renders them vulnerable to all sorts of abuses, including human trafficking.

“I have come to regard the phrase, ‘Not my problem,’ as being among the greatest barriers to ethical leadership in all professional practice.”

I remember, as a young humanitarian worker in Afghanistan during the 1990s, discovering that the bricks that I was purchasing for engineering works were made by enslaved people. But, utterly lacking a proper understanding of the issue, I justified my inaction by telling myself that, because it fell so far outside of my job description, it was not my problem.

Since then, I have come to regard the phrase, “Not my problem,” as being among the greatest barriers to ethical leadership in all professional practice. Such a denial of responsibility is also an excuse to forego learning. In the space provided by this negation of leadership the unscrupulous thrive.

Looking Beyond the European Horizon

This Ukrainian crisis is the first time in my experience that humanitarian policy makers and practitioners have sought to address the human trafficking risks that war poses.

On 17 March 2022 the Council of Europe’s Group of Experts on Action against Trafficking in Human Beings (GRETA) “warned of the dangers of people fleeing the armed conflict in Ukraine falling victim to human trafficking and exploitation.” The European Union’s provision of “temporary protections” to allow Ukrainians the right to live and work in the EU mitigates many of their slavery risks.

“A failure by humanitarians to provide human rights protections to refugees is as professionally negligent as failing to provide them with clean water.”

Refugees from other wars and environmental catastrophes, from Syria to Afghanistan to West Africa, facing similar trafficking risks can, for now, only dream of so generous a welcome to Europe. But, compared to Ukraine, few voices are raised on their behalf and, in general, humanitarian professionals still seem as uninterested in the risks of trafficking brought by war and ecological disaster as I was in Afghanistan.

A failure by humanitarians to provide human rights protections to refugees is as professionally negligent as failing to provide them with clean water. Those European policy makers who have recognised this in relation to the Ukraine crisis have met the test of this moment.

It must be hoped that, when facing other crises in places perhaps more distant to our common European homeland, that humanitarian leaders will remember this and look beyond the letter of their job descriptions to the wider challenges posed by the contexts of their work. Because professionalism is always about continually learning, mastering the complexity of the situation that faces us, and taking responsibility to shape it, even when faced with wicked problems or inconvenient truths that others would prefer to ignore.

“Protest is itself leadership.”

If nothing else, when confronted with injustice, we can protest. And, because it can help reshape the way we all think and understand, and because it can encourage the powerful to reprioritise their choices, protest is itself leadership.

Fundamentally, ethical leadership is about using what power we have to make the most life-affirming choices even when the resources to respond may fall far short of what is really needed. This is what has been shown to us by the leaders who, in the face of war, have retooled their work plans and organisations to meet humanitarian need across central Europe.

So, even if not facing the cataclysm of war, this is something that we can all learn from. 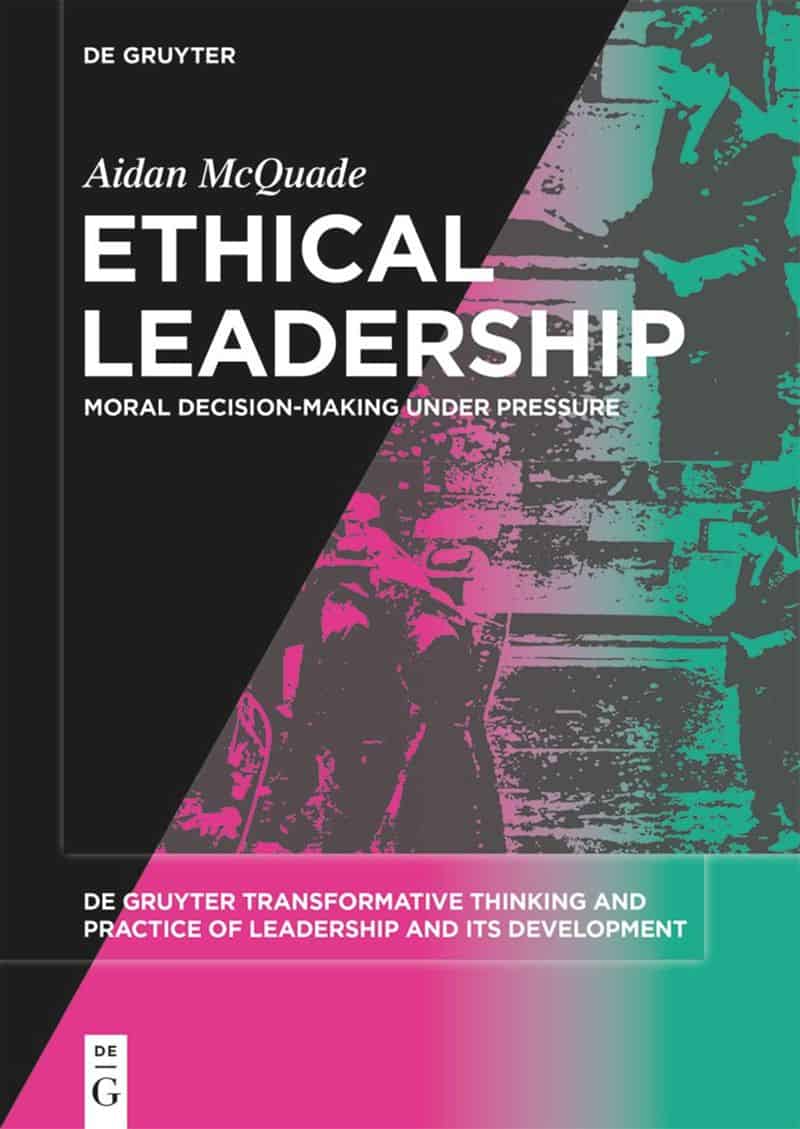 Use the code ETHICAL to get 20% off print and ebook and free shipping.

Aidan McQuade is an independent consultant on human rights and humanitarian response. From 2006 to 2017, he was the director of Anti-Slavery International, the oldest international human rights organisation in the world. He frequently contributes to international newspapers and journals on issues relating to slavery and human rights.