Modern peacemaking was invented in the European peace treaties formulated between the fifteenth and early nineteenth centuries. The roughly 2,000 treaties concluded in Europe in this period are testimony to the perennial desire to live in peace amid the growing tensions within and between European societies. They became increasingly complex and their conclusion was often marked by court and public celebrations, and eulogised in art, music, and literature. They set enduring precedents for the treaties of the modern era.

The notion of a universal peace inherited from the Roman empire was translated into the concept of Christian peace. That broke down under the impact of religious divisions which exacerbated internal and inter-state conflicts in Europe. The resulting peace treaties articulated the distinctive concerns of post-Medieval European society and the development of the European state. They demonstrate the immense impact of ideas of religious reform on society and politics from the late fifteenth century and the ways in which religious conflict was managed. They document the development of what might be called the first European state system. They show how early modern peacemaking laid the foundations both for the modern constitutional development of European states and for relations between those states to the present.

Of course, the traditional concerns of medieval polities persisted into the early modern period. The desire for domestic peace and for security had generated numerous domestic peace agreements or Landfrieden. These became more ambitious in the late fifteenth century and their negotiation was often linked with wider debates over reform and the relations between rulers and estates. The Perpetual Peace of 1495 in the Holy Roman Empire, for example, continued a long series of time-limited medieval agreements but set the empire on a new course in legal and constitutional terms by aspiring to perpetual validity.

The religious reform movements from the late fifteenth century onwards had a major impact on domestic peace orders, their implications for traditional notions of domestic peace, and new ways of dealing with them. The first ever such new-style peace was the religious peace of Kutná Hora. This was concluded in March 1485 by the Bohemian diet to resolve the decades-long conflict between the Ultraquist Hussites and the Roman Catholics. Both sides agreed to respect the conclusions of the Council of Basel. The Utraquist and the Catholic faiths were declared equal before the law.

“The agreement to disagree and to protect the legal rights of all proved ground-breaking.”

The agreement to disagree and to protect the legal rights of all proved ground-breaking. These principles were key treaties, which resolved the religious conflict amongst the Swiss Cantons in 1529 and 1531. On a much larger scale, the same principles were instrumental in bringing about the pacification of the Holy Roman Empire in the Peace of Augsburg 1555. The religious issue also played a role elsewhere, often by intensifying existing tensions over political issues; religious conflict sometimes threatened to plunge polities into ruinous civil war.

Similar agreements were concluded in Poland, France, and Transylvania. In each instance, the outcome rested on the recognition of the right to worship of two or more confessions. Yet, as the French and Transylvanian examples demonstrate, a politically motivated agreement did not necessarily lead to religious toleration. The concessions that were made were grudging and faute de mieux; and they were partially undermined from the outset by rulers determined to favour their own confession.

Two other peace treaties of this time illustrate the larger theme of the struggle for power in sixteenth-century Europe and its defence against the Ottomans. The Treaty of Cateau-Cambrécis 1559  ended the long series of Italian wars (1494–1559) in which France fought Spain for control over the Italian peninsula, with a subsidiary war fought between France and England, which was also included in the treaty. The treaty sealed the hegemony of the Spanish Habsburgs in Italy for the next one and a half centuries. In 1606 the Peace of Zsitvatorok marked the provisional conclusion of the long struggle of the Austrian Habsburgs to defend their territories, and much of Europe, from the Ottoman Empire. Hostilities resumed when the treaty expired but the later Ottoman treaties of Karlowitz (1699), Passarowitz (1718), Belgrade (1739), and Sistova (1791) were all modelled on it.

The Peace of Westphalia is rightly regarded as the most important early modern peace agreement. It incorporated elements of all the previous peace agreements. On the one hand, in the Treaty of Osnabrück, it formulated a new legal and constitutional framework for the Holy Roman Empire. It renewed the Perpetual Peace of 1495. The religious rights of members of three recognised confessions (Catholic, Lutheran, and Reformed) were guaranteed. The balance of power between emperor and estates was confirmed. Provision was made for the resolution of conflicts at every level.

Remarkably, this new fundamental law, which repackaged the constitutional principles that had been developed in the empire since at least the fourteenth century, secured the peace of the empire until its demise in 1806. In the Treaty of Münster, the Peace of Westphalia also resolved the conflicts between France, Sweden and the Holy Roman Emperor and between Netherlands and Spain. A peace treaty between France and Spain, the Treaty of the Pyrenees, followed a decade later.

It is often claimed that the conclusion of the Thirty Years War in 1648 saw the creation of a ‘Westphalian system’ in which sovereign states interacted in a new European framework of inter-state relations. That certainly was not true of the lands of the Holy Roman Empire, for they were not sovereign but subject to the laws of the empire and the authority of the emperor as the empire’s supreme judge and overlord.

It is also difficult to accept the idea of a Westphalian system for Europe as a whole. The various states may have been sovereign but their relations with each other remained unstable. The conflict between France and the Habsburgs widened to include England and the Netherlands in a protracted struggle that was only finally resolved by the Peace of Utrecht in 1714. Meanwhile, the north of Europe was also plunged into conflict. This culminated in the Great Northern War 1700-21, which was concluded by the treaties of Frederiksborg (1720), Stockholm (1719 and 1720), and Nystad (1721).

“The treaties that punctuated and concluded those conflicts … simply reflected the realisation by bitter rivals that they had exhausted their military capabilities.”

Almost all the northern powers were involved at some stage, as well as Russia (for the first time in a European conflict) and the Ottoman empire. Then, from 1740, tensions between Brandenburg-Prussia and Austria flared up repeatedly. At their height, these confrontations became part of the Seven Years War (1756-63), which Marian Füssel has described as the first truly world war, since it was fought in North America as well as in Europe and involved almost all the major European powers. The treaties that punctuated and concluded those conflicts did not recalibrate any existing system; they simply reflected the realisation by bitter rivals that they had exhausted their military capabilities.

The peace treaties of the period following the French Revolution, culminating in the Congress of Vienna in 1813-15, represented both continuity and change. Gone were the references to individual (confessional) rights that figured in the treaties before 1714 (though such provisions appeared again in the articles of the German Confederation created by the ninth act of the Congress of Vienna in 1815). New concerns appeared in the 1790s in the form of notions of natural frontiers and national self-determination, or the condemnation of the slave trade in 1815. For the most part, though, the upheavals of the period required numerous compensations for territories lost or resources expended in pursuit of the wars.

Perhaps the most significant feature of the final peace agreement in Vienna was the aspiration to establish a new order in Europe. The peace did not so much restore old polities as rationalise and modestly reorganise the changes recently wrought by Napoleon. The traditions and practices of peacemaking developed during the early modern period endured into the modern era, but there they met with new realities and a new conceptual vocabulary.  As Jacob Burckhardt commented some decades later, the Vienna settlement of 1815 was as much a revolution as the events of 1789 had been. 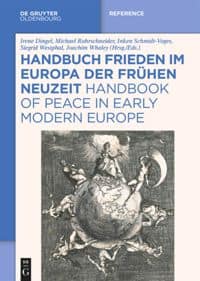 Joachim Whaley is Professor of German History and Thought at the University of Cambridge and a Fellow of the British Academy.