This post is an excerpt from the introduction to Sabine Hake’s new book The Proletarian Dream: Socialism, Culture, and Emotion in Germany, 1863–1933.

Social movements are based on, and sustained by, emotions – emotions that, simply by being evoked in the name of politics, become political emotions.

Sometimes identified with “the soul of the people,” “the spirit of the nation,” “the collective unconscious,” or “the will of the masses,” these emotions function as sources of group unity and strength, as expressions of shared goals and beliefs, and sometimes even as political arguments themselves.

Much of the power of emotions in social movements derives from their formative, if not transformative functions – namely, to provide identities, create communities, and sustain identifications and commitments. For these reasons, calls for revolutions, whether democratic, socialist, or nationalist, tend to be written in the language of emotions.

Likewise, the appeals to emotion as a site of authenticity and truth are especially pronounced during political crises and social conflicts when expressions of anger and indignation provide legitimacy to oppressed and discriminated groups.

Emotions and the Proletariat

This is also true for the symbolic politics of the working class during its historical alliance with Marxism, socialism, and communism. The emotional communities dreamt up in the name of the proletariat depended fundamentally on images, stories, songs, performances, symbols, and rituals and their changing forms and functions during the late nineteenth and early twentieth century.

“The emotional communities dreamt up in the name of the proletariat depended fundamentally on images, stories, songs, performances, symbols, and rituals.”

Given the unique power of these cultural practices, especially as part of a movement with revolutionary aims, the politics of emotion that gives symbolic expression to needs, fears, and desires not always in line with Marxist theory cannot be explained away with reference to the primacy of economic conditions or dismissed as a manifestation of false consciousness.

At the same time, there is no reason to assume that the aesthetic expressions of community and collectivity provided by the proletarian dream translated directly into new mentalities and attitudes, whether through the cultivation and denunciation of specific emotions, their equation with specific social forms and public behaviors, or their enlistment in a larger class-based culture and politics of struggle.

For that reason, the elusive connections between emotional and cultural practices must be reconstructed both through their class-specific articulations in late nineteenth and early twentieth century society, capitalism, and democracy and through their performative, anticipatory, and compensatory qualities in the larger narratives of class, nation, folk, and community.

Concretely, this means treating political emotions also as aesthetic phenomena and, for instance, seeing resentment and rage as a public performance of antagonisms and as part of a highly mediated culture of grievances and complaints.

Here the proletarian dream emerging out of late nineteenth and early twentieth century German culture, including its debts to bourgeois traditions, offers an important historical perspective on the powerful but little understood role of emotions in social movements and attests to the formative role of culture, defined here broadly as symbolic communication, as an integral part of political mobilizations.

What is the Proletarian Dream?

At once elusive and ubiquitous, the dream of the proletariat refers to the social imaginary that has survived in the countless texts produced in the name of the revolutionary working class. With other modern social imaginaries, the proletarian imaginaries share an unwavering belief in newspapers, books, and public debates as the building blocks of a functioning public sphere and in civil society as the foundation of modern democracy and the nation-state.

However, disagreements exist concerning the conditions of power and domination under which imaginaries serve legitimating functions and perform the purpose of what used to be called ideology as false consciousness.

“The dream of the proletariat refers to the social imaginary that has survived in the countless texts produced in the name of the revolutionary working class.”

In the proletarian imaginary, democracy usually means the rejection of liberalism and individualism as enabling conditions of modern capitalism and the formulation of radical alternatives in the context of the workers’ movement. A product of socialist and communist imaginaries, including their different genealogies, the proletarian dream is at once grounded in a Marxist analysis of class society and propelled forward by emotional energies that continuously destabilize these theoretical frameworks.

Always exceeding the conditions of workingclass life, the cultural texts and contexts created in the name of the proletariat function both as a laboratory for new commitments and attachments and as a repository for those needs and desires that are excluded from, or find no place in, official class-based narratives.

Drawing on the connection of dreams to the unconscious established in psychoanalytic thought, the proletarian dream refers precisely to this unique ability of symbolic practices to make meanings, form identifications, and guide the emotional processes that, beyond political convictions, sustain the workers’ belief in, and love of, socialism.

As a collective fantasy, the proletarian dream promises the victory of class struggle and revolution and, for that reason, is inseparable from the work of the imagination and its representations and mediations.

However, as an integral part of class-based politics, whether in the name of Social Democracy or Weimar-era Communism, the proletarian dream also has disciplining functions and normative effects, most obviously in the gendered hierarchies of labor and industry and in the communist habitus of discipline and self-control.

Speaking of dreams in combination with the proletariat means to apply aesthetic categories to the practice of collective dreaming, to highlight the utopian qualities usually reserved for works of art in the narrow sense, and to rethink working-class culture along the lines of what Siegfried Kracauer once concluded about another collective imaginary when he called films the daydreams of society.

And evoking the proletarian dream resonates with reflections by Walter Benjamin on the phantasmagoria of commodity fetishism that allowed him in the Arcades Project to connect the nineteenth-century dreamworld of capitalism to a longer messianic history of catastrophe and redemption.

Built around the promise of revolution, the dreamworld of socialism arises in conscious opposition to this dreamworld of capitalism. Nonetheless its emotional regimes, both through the dominant forms that are emphasized in William Reddy’s definition of the term and the oppositional and alternative functions that are emphasized in this book, remain forever haunted by what might be called antagonism, contradiction, or Hegelian dialectics.

Today these forgotten archives of proletarian identifications can be accessed not by treating political emotions as a mere expression of class identity or a mere function of revolutionary praxis but by  using them as a heuristic device in the reconstruction of socialist and communist imaginaries (rather than ideologies) and by reading them a productive means in the making of working-class culture (rather than of the working class).

The Proletarian Dream and Contemporary Politics of Emotion

Two very contemporary developments have provided the original impetus for my larger project, the renewed urgency surrounding questions of social and economic inequality and related questions about the nature of new populist movements and the future of liberal democracies.

The growing historical distance, marked by the prefix “post,” from the formative period of modern capitalism and class society that gave rise to the workers’ movement has made a critical reassessment of German working-class culture both possible and necessary. It is precisely through the profound otherness uncovered by this distance that the proletarian dream can shed light on the contemporary politics of emotion – in what prematurely has been called the posthistorical, postideological, and postdemocratic age.

“The proletarian dream can shed light on the contemporary politics of emotion in what prematurely has been called the posthistorical, postideological, and postdemocratic age.”

The end of master narratives and the disappearance of universals have created an opening for a resurgence of political emotions in the context of right wing, nationalist, and populist movements in Europe and the United States. Meanwhile, new forms of publicity and public life made possible through social media and the internet have blurred the boundaries between politics and entertainment and further expanded the role of culture – in this case, media culture – in defining social imaginaries and organizing political emotions.

Written under the influence of such developments, a look at the proletarian dream offers a much-needed historical perspective on the long history of emotions in social movements and the close connection between emotional practices and cultural practices. 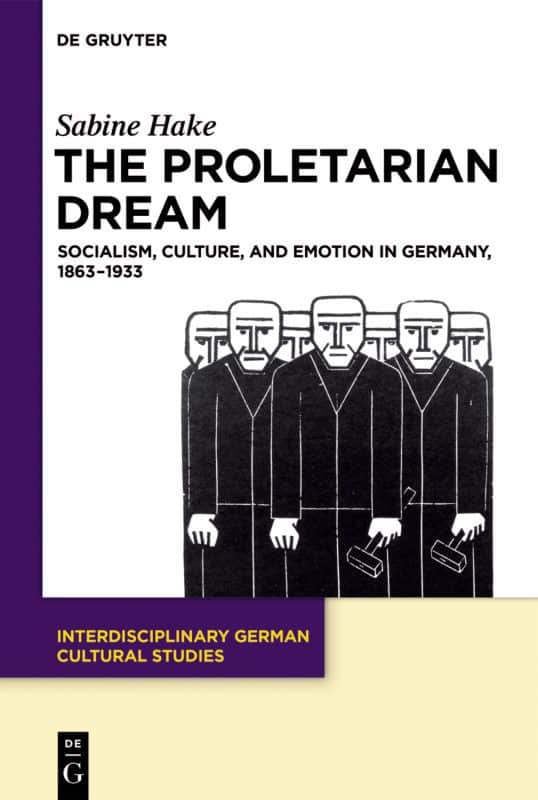 Sabine Hake is Professor and Texas Chair of German Literature and Culture at the Department of Germanic Studies at the University of Texas at Austin.