A translated and slightly altered version of this article first appeared in Alexander Kluge, Pluriversum (Spector Books, 2017), the catalog for the exhibition Pluriversum that took place at the Museum Folkwang in Essen, Germany Sept. 15, 2017 – January 7, 2018.

What good is counterfactual hope under conditions of real catastrophe? Everything Alexander Kluge does in any medium is inspired by this core question, which concerns us all, and by the impassioned conviction that the production of such hope acquires real force to help stem the tides of empirical disaster.

This is a very appealing idea!

How does it work? Are recurring appeals to possibilities of prevention and transformation enough to let us sleep at night and take effective action during the day?

Kluge’s richly faceted and highly imaginative pluriverse of anti-realist realism does much more than this, for his pluriverse of possibility encourages us—by reading, viewing, listening, speaking, and thinking together—not just to contemplate the possibility of possibility but to convert catastrophic time into something akin to what Theodor W. Adorno once called, in Negative Dialectics, a “future without life’s miseries.”

“The modern habit of European thought has taught us quite thoroughly that the future—good or bad, in its dimensional quality as a temporal structure—is by definition inaccessible to experience. Kluge’s pluriverse of convertability teaches us otherwise.”

This would seem utterly impossible, because the modern habit of European thought has taught us quite thoroughly that the future—good or bad, in its dimensional quality as a temporal structure—is by definition inaccessible to experience. Kluge’s pluriverse of convertability teaches us otherwise by helping us exercise a long-distance sense organ of temporal perception brought palpably close in aesthetic form. This is what I call Kluge’s intensified investment in “the future sense” in and for the 21st century, when others tout capitalist compression or climate change for example as indexing an inescapable erasure of futurity instead. Yet Kluge is no ideologue or illusionist of futurity, for the perceptual transformation of the future sense he helps us to cultivate is real. With Kluge, this future sense becomes accessible to experience, without ever being merely empirical or presentist alone.

A Maverick Polymath of Modernity

Kluge is a maverick polymath of modernity, a master craftsman of differential time who tinkers patiently, not only with the historical vocabulary but also with the social phenomenology of time. If differences among past, present, and future are always entangled in the dimension of experience we call “time,” these entanglements mark gaps and leaps, chasms and connectivity, a vital oscillation between empirical despair and utopian orientation to alternative horizons not entirely beyond our reach.

Working in multiple media, Kluge once famously defined montage as a “theory of relationality” involving a “contrast between two perspectives,” a contrast that pivots on something missing, not quite there. Two things are especially striking about this. First, as Kluge gently and constantly reminds us, montage is not merely about disjunctive breaks but in key ways about productive associations and conjunctions too. Moreover and second, there is nothing in Kluge’s definition that would confine montage to the visual arts alone.

Temporal oscillations across the many gaps between what is and what could or should be—“a future without life’s miseries”—are enlivened in Kluge’s countless literary experiments as well, even in his narrative prose that uses no visual images at all. Mental images function differently from and sometimes independently of visual ones, and aesthetic strategies vary across the vast medial array of Kluge’s pluriverse.

Regardless of the medial form his indefatigable work on temporal perception may take, however, human relations to cosmic motifs abound throughout his work.

Why is this? Don’t we have enough to think about on planet Earth?

One answer lies in Kluge’s longstanding critical fascination with scalar relations between the very large and the very small, relations that have themselves fueled centuries of philosophical reflection on what is important or insignificant. (See for example what rather large issues come up when a dog goes out for a walk in Adorno’s literary miniature “Great and small” in Minima Moralia: Reflections from Damaged Life or when “Little Dog Laika” orbits the Earth in Kluge’s The Devil’s Blind Spot, drawn from a massive collection of experimental miniatures of Kluge’s own making.)

Another answer lies in what one theoretical physicist has called, in reference to technological and cognitive advances at the turn to the 21st century, the “third great revolution” in cosmology, after the invention of telescopes in the 1600s and the marked expansion of telescopic discoveries in the 1900s (Michio Kaku, Parallel Worlds: The Science of Alternative Universes and our Future in the Cosmos).

Kluge’s aesthetic production is literally riddled with the vocabulary, science, and imagination of quantum physics, parallel universes, astrophysical probes, dark matter, and proliferating perspectives on time. Yet the treasure trove of human-cosmic relations that Kluge invites us to explore is best grasped as a playground for serious exercise of the future sense as a non-empirical but real form of temporal perception oriented to life that would be free of catastrophe.

Counterfactual hope not only alerts us to this possibility but participates in this conversion in lived time. If Georg Lukács’s poetic image of “transcendental homelessness” captured modern alienation between human life and “the starry sky” amidst a raging world war a century ago, in The Theory of the Novel, the cosmic motifs pulsating throughout Kluge’s work—in the form of suns, planets, stars, galaxies, extraterrestrials, astrophysics, and outer space—vibrate with our use of futurity as an experiential portal in time. This portal allows something missing, something not yet of this earthly world, to begin to enter into it, to manifest in human perception now, despite all knowledge of empirical despair.

For Kluge and for us, this is not metaphysics but the shared work of real sensory approximation to the utopian dimension of time. 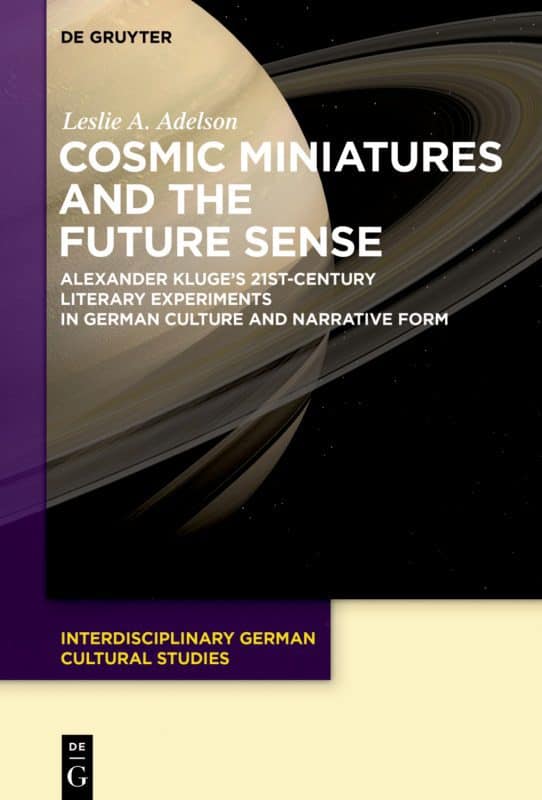 Leslie A. Adelson is Department Chair and Jacob Gould Schurman Professor of German Studies in the College of Arts & Sciences at Cornell University in Ithaca, New York.