This article is an extract from the book
Women Doctors in Weimar and Nazi Germany: Maternalism, Eugenics, and Professional Identity, published by our publishing partner, the University of Toronto Press.

In a 1937 article in Die Ärztin, Emmi Drexel, a school doctor in Berlin, lauded the opportunities that National Socialism offered to her and her colleagues. She said they would be able to contribute to national education, publicize racial political requirements, and indoctrinate hesitant mothers to support Nazi ideas about health.

While she appreciated that the Weimar Republic was certainly committed to promoting large families and a distinct German nationalism, she praised National Socialism for making the “spiritual recovery of the Volk” a national goal and one of the most important duties of German doctors like herself.

Drexel exemplifies the number of women who gained new health and population policy positions under the Nazi umbrella of ideals like the Volksgesundheit (people’s health). The Nazi Party offered supporters like Drexel a myriad of opportunities for employment, education, funding, and to both create and feel a part of Hitler’s Volksgemeinschaft or people’s community.

The National Socialist German Workers’ Party (NSDAP) had already received especially strong support from traditional professionals, such as lawyers and civil servants, who became disillusioned with the Weimar Republic as the crises of overcrowding, inflation, status loss, and organizational competition within their various occupations grew. Doctors were no exception to this rule and in fact were among some of the strongest supporters of the Nazi Party before 1933.

“Many female doctors saw the appeal of Nazism, as it presented them a number of new opportunities.”

More than half of women physicians also became affiliated with Nazism. Many female doctors like Drexel saw the appeal of Nazism, as it presented them a number of new opportunities. In fact Drexel and other non-Jewish female physicians who continued their professional work under Nazism were resourceful as they recognized the ways in which they could best serve the regime.

Despite their expulsion from the elite health insurance practices, they continued their work for women and children in the League of German Girls (BDM), teaching and enlightening young girls, and for the Reich Mothers’ Service (RMD), educating mothers.

Women doctors also claimed to be valuable to the regime’s racial hygiene agenda because of the authority they commanded with their women patients, particularly their abilities to promote pro-natalism by awakening women’s inner desires for children.

Women doctors continued to perform similar types of work that they did in the Weimar Republic, championing themselves as experts in women’s and children’s health through their employment in the BDM and the RMD. They maintained that they could create and enhance the Volksgemeinschaft by preparing young girls in the BDM to be the healthy, responsible members of the future generation and by moulding mothers in the RMD to be more health conscious.

While they continued to promote women’s and children’s health, their rhetoric took on a far different meaning than it had during the democratic Weimar era because it emphasized the goals of the party and the state alongside the needs of their patients. Medicine became tailored to fulfilling the ideological goals of the Nazi state, which consciously used women doctors to indoctrinate women and children to its exclusionary, racial health policies.

In addition to carving a niche for themselves in Nazi medicine by proclaiming a particular “feminine” expertise for the health of approximately one-half of the Volksgemeinschaft, female physicians also participated in racial hygiene training at Alt-Rehse, the doctors’ training school for racial hygiene matters during the Third Reich.

Women doctors, who reported favourably about their experiences at the racial hygiene educational camp at Alt-Rehse, then translated this training into practical application either in the BDM or onto the pages of Die Ärztin, where they discussed the special role they would play in achieving the racial hygiene goals of the Nazi state.

Upholding the aims of a repressive dictatorship

Female physicians who remained involved with the BDÄ upheld the aims of a repressive dictatorship. In emphasizing the unique “doctormother” roles they could play, they situated their professional work within the paradigm of the feminine-doctor duties of the new state, which included protecting mothers and their children and educating and indoctrinating German women to be responsible comrades.

On the one hand, this can be viewed as an honest attempt to make room for themselves in an overcrowded, unreceptive, and, at times, hostile profession. Even if their rhetoric proved somewhat hollow after the Second World War started, when women were needed in the medical profession, it is well documented that in the early 1930s, the Nazis sought to keep women out of universities and certain professions and initially upheld laws that discriminated against married women doctors whose husbands already had adequate income.

And yet on the other hand, this raises questions about women doctors’ complicity, as they fought so determinedly to work for the National Socialist state. Historians Johanna Bleker and Christine Eckelmann contend that creating this concept of the “doctor-mother” in the new state was a defence strategy of female doctors, who were battling an antagonistic medical profession.

While this was certainly true, these female physicians were opportunists. They recognized openings in women’s and children’s health available to them under the Nazi state, and they were well prepared to assume these jobs because their work in the Weimar era had groomed them for similar activities in the Nazi period.

Hence I see the BDÄ members who continued to work within the confines of Nazism as opportunistic, as they were active proponents of the services they could offer to the party and state. While the state recognized how it could employ women physicians to enlist other women and children to its causes, female doctors also identified the ways they could benefit the regime.

For example, they fashioned themselves as trusted advisers for girls in the BDM and as role models for mothers in the RMD. Moreover, this type of work was a natural extension of both their activities in the home as well as the professional projects they undertook during the Weimar period. The Weimar state had already entrusted women physicians to train women to be proper mothers and to educate youth to be healthy, and this was a task women doctors succeeded at because women confided in them to a greater extent than men.

“By situating their activities within existing frameworks, members of the BDÄ adopted Nazi ideology.”

Nazi medical authorities similarly recognized how appealing it was to employ women doctors, especially if they were mothers, in the BDM and RMD. Female doctors were no longer being outcast and marginalized to supplementary positions in women’s and children’s health that were part-time, that did not pay very well, and that were undesirable during the Weimar era. They were now working under a state and within state organizations that upheld women’s and children’s health, and therefore the work they specialized in was essential to Germany’s future.

But by situating their activities within existing frameworks, members of the BDÄ adopted Nazi ideology. This is not to say that all women physicians accepted and promoted Nazism. As Gisela Bock has pointed out, women under Nazism could become victims, perpetrators, bystanders, and followers, and sometimes fell under more than one category at different times or even concurrently.

For Jewish doctors, who were approximately one-third of women doctors in the BDÄ before 1933, Nazism meant loss of citizenship, emigration for the fortunate, and death for those unable to escape the so-called Final Solution. 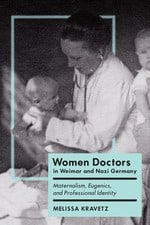 Melissa Kravetz is an Assistant Professor of History and Co-Director of Women's and Gender Studies at Longwood University. Her research and teaching interests include European history, especially Modern Germany, the history of women, gender, and sexuality, food history, and the history of science and medicine.