In this article, I will mention some very offensive words, so offensive, in fact, that their use can dehumanize the hearer or even an entire group of people. It is important to state this difference between mentioning and using a slur term, however, even mere mention bears the potential to cause offense in the reader. This, of course, is not my intention.

“In our language communities, we share some deep knowledge about offensive words, about their meaning, their use, and their effects.”

In our language communities, we share some deep knowledge about offensive words, about their meaning, their use, and their effects. It is knowledge we have acquired in our social interactions, in our everyday lives, it is something we have learned about in comedy shows, newscasts, movies, books, magazines. What we know about these words is oftentimes much more profound than what you would find about them in a dictionary or academic research paper on the matter.

The Fascination of Taboo Words

Despite their devastating effects, slur terms are also fascinating to us. They are taboo words, and breaking taboos is something we enjoy sometimes, as for instance when watching a comedy show, when being around our closest friends, or just out of mere schadenfreude.

In any context of use, taboo words will typically trigger heightened emotions, positive or negative, with effects ranging from social bonding to utter dissociation.

I believe this to be the main reason for our fascination with them, the reason for all the lively discussions I’ve had over the years with linguists and laymen alike, all eager to share their own stance on the topic.

Can The degree of offensiveness be part of a word’s meaning?

Thanks to this fascination, it was quite easy to convince several hundred speakers of German to participate in a questionnaire study that asked respondents to rate the degree of offensiveness of a number of given slur terms and to answer the question: “What is the most offensive word you can think of?”

The goal was to find out if an individual degree of offensiveness can actually be part of a word’s meaning. Many linguists consider differences in force as purely pragmatic. They believe offensiveness of a term can only be evaluated in a certain context of use.

What we have to distinguish, however, is the force generated in a particular speech act and the offensiveness of the words themselves out of context. As competent speakers, we know that utterances can be racist without using any slur terms at all (consider Donald Trump’s question about Obama: “Why doesn’t he show his birth certificate?”). And we also know that some speakers use extremely offensive slur terms like the N-word to indicate camaraderie or friendship (“He’s my n****!”, A.J. Johnson about Master P).

Beyond that, we all have opinions about how slur terms differ in their offensiveness before they are actually used in a certain context, e.g., we know that the N-word is more offensive than whitey (Johnson uses n**** to indicate a close relationship, however, she is probably aware that the word is highly offensive).

A Consensus in Speech Communities

With my survey, I intended to show that these opinions are not just random and that we can track a consensus within our speech communities about how offensive certain words are, thus bringing evidence for the degree of offensiveness as part of a slur’s meaning.

In order to have my participants reflect the meaning of the slurs without any particular context of use in mind, I had them imagine themselves as lexicographers sitting alone in their home offices and drafting new lexicon entries for 33 given slur terms. Part of their job was to rate the offensiveness of the respective item on a 6-point Likert scale (0 being not offensive at all and 6 being extremely offensive).

The results exceeded my expectations by far: Not only were the participants’ ratings incredibly similar; a second round two years later with a new batch of participants resulted in fairly the same overall ranking of the 33 words.

Idiot, for instance, has lost its referential meaning, i.e., it no longer targets group membership (into the 19th century, Idiot still referred to mentally challenged people) but certain behaviors, attitudes, or character traits that are negatively perceived by the individual speaker. This is comparable to the use of Arschloch (asshole) and seems less offensive than targeting group membership, because certain forms of behavior might be worthy of contempt (e.g., bullying and animal torture), whereas mere group membership usually never is (exceptions being nazi and child molester).

Spast (spaz) seems to face a similar loss of referential meaning, however, it has not (yet) developed as far as Idiot, as most of the speakers still have access to its referential meaning. Spast is less offensive than the N-word, though, for it is mostly used in reference to people who do not belong to the designated group of people, the mentally challenged. In the case of the N-word, speakers know of a rich history of discrimination against blacks (particularly in the United States), which is one of the sources informing them about the word’s extreme offensiveness.

What’s the most offensive word you can think of?

In the non-restricted part of the questionnaire (“What is the most offensive word you can think of?”), participants most frequently named Hurensohn (whoreson), followed by Fotze (cunt) and Missgeburt (deformed person). Altogether, they generated 61 words in addition to the given ones.

The results of this part of the questionnaire are at odds with a 2012 book on filthy German language by Hans-Martin Gauger, who has argued that German slurring almost exclusively borrows from feces (Arschloch, Scheiße) and not from the sexual sphere as English speakers do (fucker, fuck).

However, out of the 61 words generated by the German speaking participants, only 12 related to feces and more than half to the sexual sphere. This might indicate that Germans tend to find the latter type more offensive than the former.

There are many sources informing the speech community about a term’s offensiveness. If we assumed there was only one, like the targeting of group membership as opposed to individual behaviors, then we would have no explanation for the varying degrees of offensiveness that different slur terms can have for one and the same target group (just think of the different terms designating African Americans).

Besides the sources that influence all slurs for the same target group in the same way (e.g., racist institutions, their ideologies and practices, stereotypes, the social status of the target group), there are also sources affecting the individual words themselves (e.g., metalinguistic discussions like the text you are reading right now, advice on linguistic behavior from educational institutions and the PC movement, frequency of use, censorship, court decisions and their media coverage).

It is easy to see that such a complex picture of various sources cannot stay static. It is changing and with it the degrees of offensiveness. Over the course of their meaning change, slur terms cannot only increase in force (redskin) but also decrease (idiot) or even become neutral terms (gay, queer).

Slur terms combine various kinds of meaning and are accompanied by heightened emotions in almost every context they are used or even only mentioned in. It must be due to these special features that slur terms somehow resist established theories and frameworks traditionally applied to describe the meaning and use of language.

My empirical data from the city of Mainz can obviously only count as a first step, from which we have to head on to other regions, age groups, cultures, languages, and so on. However, I think it is safe to assume that the degree of offensiveness is a verifiable feature of certain words in other speech communities, too. 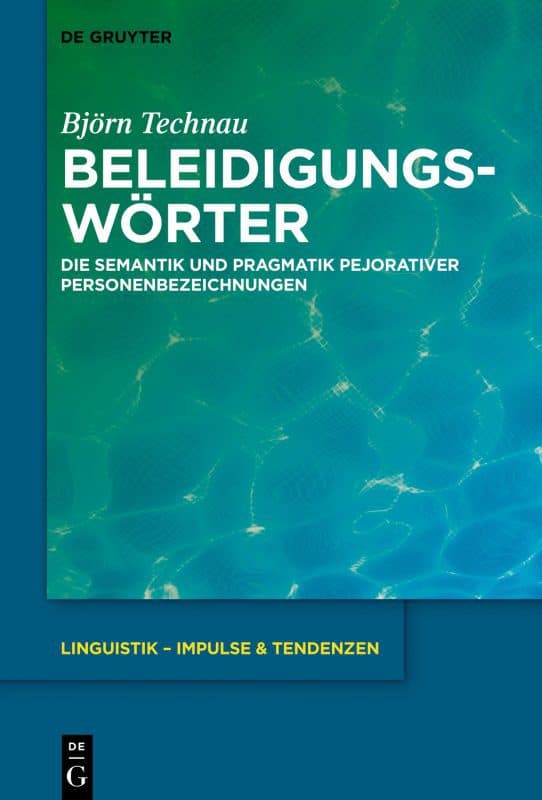 [Title Image by yuoak, via gettyimages]

Björn Technau is Associate Director at the German Immersion School of New York in Brooklyn. His research interests include the semantics/pragmatics interface, pejoration, multilingualism and sociolinguistics, with a focus on conversation analysis. As a linguist, Björn has held various positions, including Research Associate at the Research Center of Social and Cultural Studies Mainz (SoCuM), Language Consultant at the Goethe-Institut New York, Research Associate at the German Linguistics Department at Mainz University, and DAAD Lecturer at Nanjing University (China). Photo by Samira Hermenau.