Specific sounds used in Japanese to form invented names for Pokémon creatures directly correspond to the way players judge the characters, a new study finds. Furthermore, the same sound segment can stimulate a number of mental associations across different dimensions.

The research article “What voiced obstruents symbolically represent in Japanese: evidence from the Pokémon universe”, was published in De Gruyter’s international Journal of Japanese Linguistics.

While it was long held that the relationship between sound and meaning is generally arbitrary, modern phonetic and psychological research has shown that some systematic iconic relationships do exist between the two. Previous research determined that voiced obstruents (speech sounds formed by obstructing airflow such as [b], [d] and [g]) in Japanese Pokémon character names positively influence the way the creatures are perceived.

However, this latest research investigated what precisely these voiced obstruents can represent in Japanese. The researchers also addressed the hitherto under-represented issue of cumulativity: whether multiple occurrences of the same set of segments increased the symbolic effect.

Candidates for two experiments were recruited via social network sites and asked to judge specially coined, one-off names from the world of Pokémon in terms of the artificial creatures’ weight, height, evolution and attack values. This is because, in the game, Pokémon characters evolve, usually becoming larger, heavier, and stronger. The randomly generated names were all trisyllabic, containing either zero, one or two voiced obstruents.

Those Pokémon names with a voiced obstruent were judged to be stronger, heavier and larger than those without. Moreover, the perception of the ‘evolution’ increased in line with the number of voiced obstruents. These results are the first to provide unambiguous experimental support for the productivity of sound symbolic associations in these four semantic dimensions in Japanese.

The experiment proved that, in Japanese, one class of sounds – in this case voiced obstruents – can symbolically represent multiple semantic meanings. It also found that the effects are indeed cumulative: for each of the semantic dimensions tested, two voiced obstruents systematically evoked stronger images than one.

Since the Pokémon universe is fixed across different languages, it could be used to compare such sound-meaning connections around the world.

“Our research so far has primarily been on Japanese,” says lead author Shigeto Kawahara, Associate Professor at the Keio Institute of Cultural and Linguistic Studies. “However, if our results arise from physiological and physical restrictions on our speech behaviour, it wouldn’t be too surprising if our finding extends to other languages. This is an interesting and exciting possibility that we plan to explore in the future.” 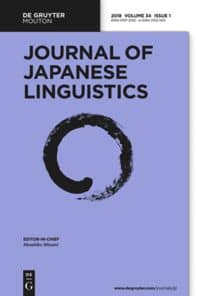