After Euclid’s Elements in the third century BC, the most extensive and influential mathematical treatise of the antiquity, mathematics was presented as separate domains, such as arithmetic, algebra, and geometry. This separation continued for hundreds of years, and each domain developed independently. Until the nineteenth century, there was no general foundation connecting the different mathematical disciplines.

This peculiarity distinguished mathematics from most natural sciences, each of which had their own unifying basic building blocks: atoms in physics, elements in chemistry, and cells in biology. The equivalent of a universal mathematical atom just didn’t exist.

The situation did eventually change when Georg Cantor (1845–1918) created the theory of abstract sets consisting of abstract elements, i.e., elements connected to each other by a single membership relation. Unfortunately, the theory wasn’t perfect. It allowed for the creation of a set of all sets, which turns out to be paradoxical and led many mathematicians to distrust Cantor’s theory.

“If its problems were solved, set theory would be able to unite arithmetic, algebra, geometry, analysis, and other domains of mathematics, into one subject.”

Set theory did have one proponent in David Hilbert (1862–1943), who thought the subject was a mathematical paradise: He wrote, in the original German, “Aus dem Paradies, das Cantor uns geschaffen, soll uns niemand vertreiben können”, or in English “From the paradise, that Cantor created for us, no-one can expel us.” D. Hilbert used the word “paradise” because he believed set theory could be the unifying foundation mathematicians were after. If its problems were solved, set theory would be able to unite arithmetic, algebra, geometry, analysis, and other domains of mathematics, into one subject.

Felix Hausdorff (1868–1942) was one of the mathematicians who tried to realize this mathematical paradise. In his famous book Grundzüge der Mengenlehre he described the foundations of mathematics as a tree, with set theory as a trunk and all of the separate domains of mathematics branching out. His amazing book set the tone for modern mathematics and influenced many subsequent publications.

Hausdorff’s and Bourbaki’s books led the way in consolidating mathematics under one collection of basic building blocks: elements, sets, structures, and systems (with an indispensable and indiscernible involvement of logical tools).

Hausdorff’s text is a must-read for training mathematicians to understand mathematical foundations, along with remarkable later books of other authors such as Kuratowski. Unfortunately, Bourbaki’s book on sets and structures was so difficult to read that it never gained the same reputation.

After the first edition of Hausdorff’s book in 1914, set theory developed swiftly, meaning that the subject today is very different compared to how it was in the twentieth century. To start with, the discovery of paradoxes in Cantor’s set theory forced mathematicians to be more precise with their formulations. Mathematics advanced from the naive set theory expounded by F. Hausdorff to axiomatic set theories with strict logical language.

Using von Neumann’s approach to the construction of ordinal and cardinal numbers as special sets, mathematicians could construct the set of natural numbers, integers, rationals, and real numbers inside theses axiomatic set theories. This achievement allowed them to overcome the gaps in Hausdorff’s book, where ordinal and cardinal numbers were introduced naively through extended notions, such as “things” and “symbols” and, moreover, knowledge of real numbers was considered as self-evident.

The Virtues of Hausdorff’s Work

The enormous virtue of Hausdorff’s book is the general theory of measurable (real-valued) functions on descriptive spaces (a descriptive space is a set with a fixed set of its subsets). The extreme importance and naturalness of the family of all measurable functions follows from the famous Borel–Lebesgue–Hausdorff theorem asserting that:

This family is extraordinarily abundant throughout the mathematical world.

However, it turns out that the concept of measurable function is not strong enough to solve some problems that arise later in function theory. For that reason, in 2006, mathematicians found the family of uniform functions on a prescriptive space—a set with a fixed set of its finite covers.

The importance and naturalness of the family of all uniform functions follows from the characterization theorem (2008) asserting that:

This family is also extraordinarily abundant.

In Hausdorff’s book, he also described an important branch of mathematics called the theory of the Lebesgue integral. Since the times of H. Lebesgue and W. Young, there have been two parallel points of view in integration theory. The first considers the integral as a special structure over a descriptive space with some measure. The second considers the integral as a superstructure over a functional linear space with some linear functional on it. Outstanding mathematicians spent many years trying to prove the parallelism of these two points of view.

For the most popular topological space with a Radon measure, this supposed parallelism is known as the Riesz–Radon–Fréchet problem of characterization of Radon integrals as linear functionals. Solving both this problem and the general version took nearly one hundred years. 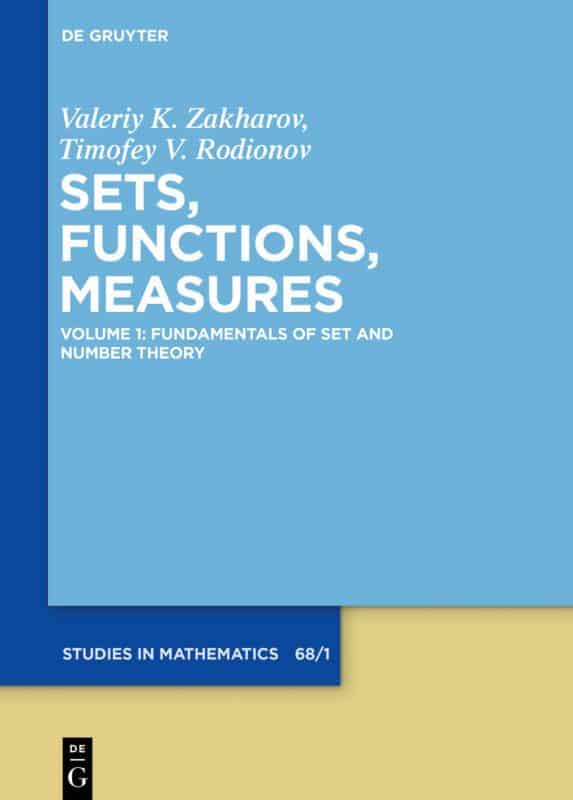