Between May and October 2020, the De Gruyter insights team conducted wide-ranging research examining the impact of the pandemic on scholars and their work. We discovered a worrying picture of burned out academics with early career researchers, female academics and those with teaching and caring responsibilities bearing the brunt of the stress.

But we also uncovered some stark differences in how academics from different disciplines were being affected too. While STM academics suffered major problems through the closure of labs and medical facilities early in 2020, many of these resources are now open fully and functioning well – with research productivity among these scholars improving as a result.

Unfortunately, the same cannot be said of many humanities scholars who are still struggling due to travel bans and because of the restrictions that libraries, archives and collections must still impose. Our research found that 73% of humanities scholars feel their research is hampered in one way or another with 55% still facing major problems accessing essential facilities and resources.

While many of the resources used by humanities scholars are partially open, the restricted nature of their operation is a cause of constant frustration.

For example, most campus libraries now operate strict booking systems which mean that researchers must secure slots well in advance to visit. Often these slots can be quite short in order to fit in as many researchers as possible –limiting the amount of research time available.

In addition, reading and research material must often be booked out in advance too and many report experiencing difficulties accessing curators and librarians due to changing job priorities and furlough.

“Many say that their research has become far slower – sometimes impossible – as a result.”

While necessary, these restrictions pose far more than an inconvenience to a academics wanting to advance their research. Many say that their research has become far slower – sometimes impossible – as a result. Something which may go on to impact scholarly careers and research quality over time.

The Value of Serendipity

“Normally, when I’m in the archive, I go off on tangents”, explains Bodie Ashton, a historian at the University of Erfurt. “I’ll be reading through material and then there will be something I never expected to find that sends me off on a new avenue.”

Like most humanities scholars, Ashton’s process involves exploration and serendipity. Something made far harder with library restrictions. “I always start my research by keeping a very open mind. I don’t know where my reading is going to take me – and that’s a good thing. But with the situation now, there’s no space to give something a try or go down a false path – that makes things very hard,” he said.

Ashton is not alone in finding the current situation frustrating. Final year PhD student Davide Massimo, a classicist at Oxford University says that pre-pandemic he’d consult up to 20-30 books in a normal day of research, pinging between various Oxford libraries. “Most days I’d spend eight to ten hours in the library. Now I get a three-hour slot and I’m lucky if I can get 2 or 3 of these slots in a row – it’s very frustrating,” says Massimo.

While access to secondary resources often poses less of a problem – mainly because much of the literature is available widely online – many researchers face barriers accessing material in smaller archives and collections. Restricted access to these physical primary resources – letters, books, diaries, catalogues, artefacts – is impacting the research of many humanities scholars.

One such scholar is Elizabeth Watkins, an art and film historian at The University of Leeds. Watkins’ specialism is early 1900’s polar expedition films and her research involves hunting through long wooden boxes containing hundreds of glass lantern slides of polar expeditions – or at least, it did.

“You can’t just rely on the online image.”

For Watkins, accessing the physical object is paramount – digital versions are a poor second to the real thing. “You can’t just rely on the online image. You can get a lot of information from the physical slide – processing marks, labels on the reverse side of the slide and so on are useful in understanding the editing and social use of the image,” she said.

Also, the fact that a photo or image is online already means it’s gone through a process of selection and curation. Where a resource has been digitized, this means that broadly, someone, somewhere has already used it as the basis of their work.

Like any academic wanting to produce original research, Watkins is looking for material that hasn’t been preselected or discovered. “Many of the photos in online collections are iconic images created for public display. These are great but I’m just as interested in the photos that didn’t work out – I can often learn far more from these,” she said.

Academics are being impacted differently depending on where they are in the research process too. Those who have completed their primary research and engaged with physical resources pre-pandemic are often far better off than those who haven’t.

Many are taking a ‘wait-and-see’ approach, biding their time by working on an element of their research that might not be so dependent on archival material.

Silke Hackenesch, a historian at The University of Cologne, is researching the history of transnational adoption. She should have gone on an essential field trip to an archive in the US in March 2020 – but her visit was cancelled.

Unfortunately, she needs access to the letters, memorandums, protocols and meeting minutes in that archive before she can complete her project. “There’s just this one archive left I need to work with now and I don’t know when that might be possible. I’m increasingly worried about this,” she said.

At the moment Hackenesch feels like she’s treading water, “I’m moving things around and I’m trying to write as best I can and attend to other parts of the manuscript – but I need access to that archive,” she said.

But perhaps most damaging aspect of the pandemic and its many restrictions is the uncertainty, anxiety and fear it creates. One early career researcher who asked to remain anonymous believes the pandemic is hurting his career and impacting his mental health. “I was hired by my department nine months ago but I feel like I’ve done nothing – I hate that. I’m not able to go to the archives and the libraries so I’m reading a lot. But all that leads to worry and feelings of imposter syndrome. There are many job losses in my field. I feel I have to produce.”

“The academic market has always been hard – but now it’s really hard.”

Another researcher expressed similar fears and worries. “You feel like you’re going so much slower – and that impacts your mood and feelings of isolation,” he says. “My future prospects are so uncertain now. The academic market has always been hard – but now it’s really hard. Everyone I know is extending their positions if they can – stalling. A lot of people are worried – it’s a widespread feeling.”

As with academia more broadly, humanities scholars with experience, networks, funding and security are finding it easier to continue with their research than those on the first rungs of the career ladder – here the pressures are most stark. For many academics, pandemic restrictions are just the tip of the iceberg and add to a wider problem.

In Germany, thousands of scholars shared stories of their poor working conditions last week on Twitter in reaction to a video from the Ministry of Education and Science. The video explained an existing (and much criticized) law that enables research institutions to offer short-term contracts to scholars. The protagonist of the video, which the Ministry has now deleted, was Hanna. Within a day, #IchBinHanna (I am Hanna) became a trending Hashtag on Twitter, forcing the Ministry to react in two messages.

In many ways, the pandemic seems to have intensified existing tensions on the academic job market. And it seems like debates around working conditions for academics are only just beginning.

Check out our research report from 2020 here: 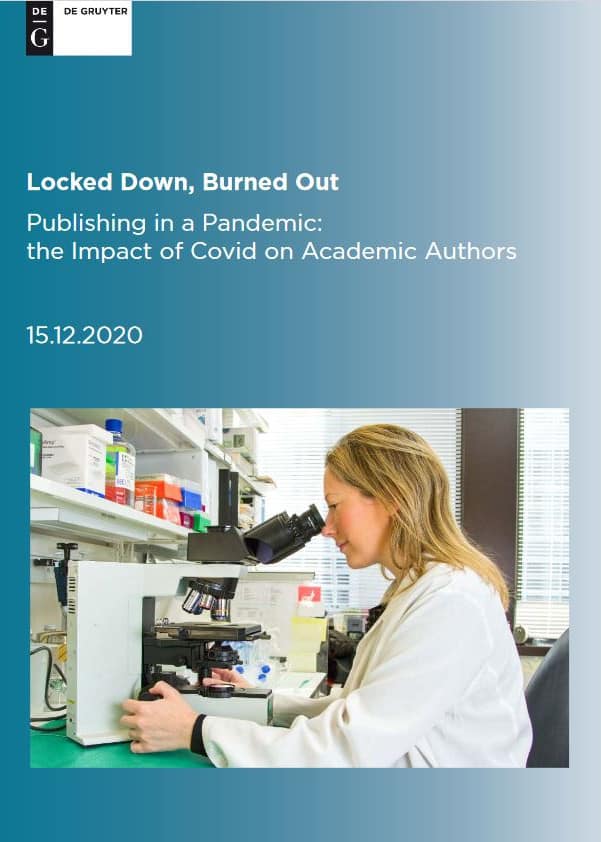 De GruyterLocked Down, Burned OutPublishing in a Pandemic: the Impact of Covid on Academic Authors