“Maximizing the access to existing knowledge is a means for supporting scientific progress..”

The ultimate aim of open access is to remove barriers in the accessibility of scientific knowledge. Offering free access to scientific publications is crucial for large groups of users with poor or no institutional support, e.g., researchers in developing countries or users without institutional coverage. Beyond increasing the population of users (which is valuable enough), open access follows from the core mission of science: scientific knowledge is incrementally built upon existing knowledge, which means that maximizing the access to existing knowledge is a means for supporting scientific progress.

A frequent source of skepticism to open access practices relates to the maintenance of quality standards. The developments in the publication media resulted in a wealth of publications, journals and publishers with the usual inflation effects on the quality of the outcome.

Obviously enough, quality assurance procedures can be applied to scientific publishing independently of the accessibility measures. Gold open access refers to publications in open access media (OA journals or OA publishers) using the usual procedures for quality assurance. The Directory of Open Access Journals lists 556 journals with “Linguistics” as one of their subjects. The targeted audience and the publication processing procedures certainly vary very much in these entries, but 344 out of 556 journals (i.e., 61%) follow the current quality control standards (double blind peer review).

Article processing fees are a typical OA funding model. This model restricts the users with poor or no institutional support to the role of end user. Furthermore, the publisher depends on the number of publications, i.e., the interest of the publisher potentially interferes with the interest of maintaining rigorous quality control.

The alternative model involves an institutional body or association that covers the publication costs and guarantees free access for both sides, authors and readers.

“It is an inherent part of our commitment to scientific progress to remove any barriers in the dissemination of scientific findings.”

THE JOURNAL OF THE GERMAN LINGUISTICS SOCIETY

Since 2017, the Zeitschrift für Sprachwissenschaft – the journal of the German Linguistics Society (DGfS), founded in 1982 – is an OA journal.

Open Access does not only apply to the articles that are published since 2017 and are freely accessible from the publication date on but also to the complete backlist of contents since volume 1, issue 1 (1982). Publication costs are covered by the association (i.e., by the subscribers), following the practice of the print journal.

There has hardly ever been a decision in the journal management that has caused less debate than this one. Open access radically changes the worldwide visibility of the journal’s contents. 13 years after the Berlin Declaration on Open Access to Knowledge in the Sciences and Humanities, the commitment of individual researchers and scientific societies to open access is evident. 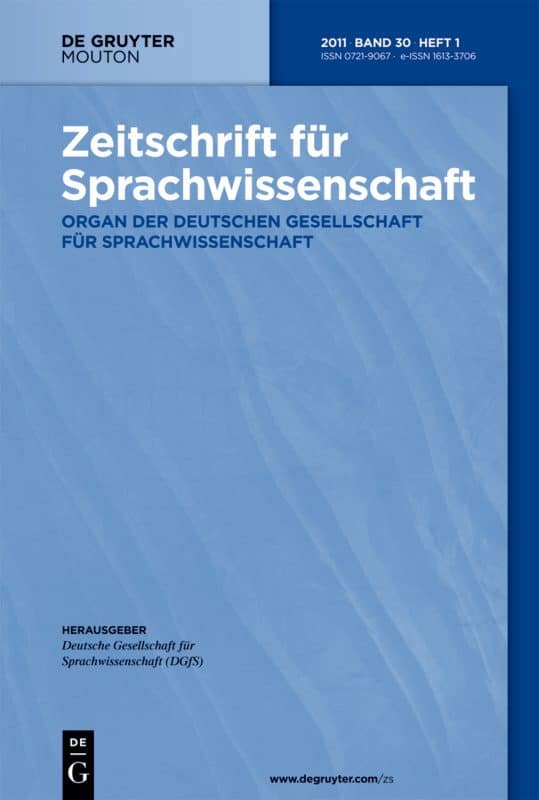 This is part II of our three article series for Open Access Week 2017.
Read the other articles

[Title image by littlehenrabi via gettyimages]

Stavros Skopeteas is Professor of General Linguistics at the University of Göttingen and currently managing editor of the Zeitschrift für Sprachwissenschaft. His research focuses on syntax, prosody, experimental fieldwork, and the study of American and Caucasian languages. Learn more on his Website.