This article was first published on the website of Henley Business School and has been edited for publication on De Gruyter Conversations.

Of course it’s not. We could never have precisely imagined the here and now a year ago. Yet, not everything is different. Even against the backdrop of a global pandemic, many people in many places around the world have managed to recreate many of the familiar patterns of working life. Knowledge-based organisations, in particular, have proved remarkably resilient.

But how did this amazing coordination happen so rapidly and extensively in so many places? That’s complexity in action. Complexity in action is such an ordinary part of organisational life that we normally gloss over it. In this short article, however, I want to pause to explore it.

How Did We Get Here?

Looking backwards we can connect some of the dots about what has actually happened to get us to today into a convincing story. In doing this, we clean up the story by leaving out many of the dots of yesterday that don’t quite fit the story that we want to tell today. And, with the benefit of hindsight, we leave out all the little things that we thought were dots, but turned out to be smudges!

It all seems obvious once we know the answer. Consider, for example, we used to think that diesel cars were an environmentally friendly choice due to their more economic consumption of fossil fuels. Yet we now know that diesel emissions are hazardous to human health. So, our views on whether a past decision to buy a diesel car was a good decision, or not, may have changed over the years.

Time marches on, but it’s the only thing that does. It’s important to understand that the link between past and present is not a straight line. It’s rather more complex than that.

So, what does the future look like? Well, that’s the multimillion-dollar question! It’s the one that managers in all kinds of enterprises would love to be able to answer.

Reflecting on the future is tricky territory. We need a large dose of pragmatism to avoid being either mystical or statistical. The future is changing right now, so predictions and prophesies are merely guesses. And, in a changing world, they are highly likely to be wrong in important ways.

“We need to think in terms of loops, rather than lines.”

Since the relationship between the here and now and what will become is not a straight line, we need to think in terms of loops, rather than lines.

In this “wiggly” world (as Chris Rodgers, aptly puts it) small actions or throwaway comments may have unpredictably large effects – this is known as ‘the butterfly effect’. Equally, large efforts may have little or no effect. Precisely what will happen in the future is unknowable, until it emerges. Uncertainty is the only certainty!

The here and now is in constant motion as we adapt and respond to one another in the moment – for example in meetings, via email or chat. Even walking down the street, we are engaging in loops of mutual influence. We often refer to this mutual influence as ‘leadership’.

“We are engaging in loops of mutual influence.”

When the world flipped from in person to virtual meetings, we knew roughly where we were. We understood the conventions of ‘meeting’ and ‘conversation’ that we were looking to recreate in a digital space. We probably knew quite a lot about many of the topics of our work conversations and we probably had some familiarity with the devices we were using. Yet, chances are that we were using familiar devices in new ways, maybe we were getting to grips with new apps, and we were almost certainly navigating new meeting norms.

Conventional wisdom suggests that when large organisational change efforts fail, the problem is people’s resistance to change. Complexity science shows that it can be the complete opposite. Human beings are incredibly creative and adaptable. Facing multiple pressures from a global pandemic, many people, in many places, made many adjustments to how they were working to deliver something akin to business as usual without anyone being in charge of making it happen. That’s not resistance, it’s resilience, and it’s incredibly valuable in a complex and changing world.

Even in times of fairly major disruption, we tend to know roughly where we are and roughly what to do. There is some recognisable pattern to it, albeit that pattern is continuously changing in expected and unexpected ways. I call this ‘dynamic patterning’.

If we want to get to grips with the future, then we must pay close attention to the here and now. We are co-creating the future through our everyday words and actions. But as our words and actions get entangled in the dynamic patterning of organisational life, surprises, puzzles and unintended effects are common. That’s why even the best planned change projects often take unexpected twists and turns.

Reflecting On the Future

So, what strategies do we have at our disposal to reflect on this changing future? There are valuable lessons to be learned from hindsight. No one wants to keep on making the same mistakes, or missing opportunities that could be grasped. But lessons don’t stay learned if they sit in the past. We must bring them into the here and now so that we can evolve the learning in a changing world.

“What we need is insight.”

Rather than relying on hindsight to steer us forwards, or striving for the impossible goal of accurate foresight, what we need is insight. That means focusing on the emerging future that is in sight on the edges of the here and now.

Paying close attention to the dynamic patterning of organisational life in the here and now helps us to develop insight into the future as it is emerging. We are looking out for emerging issues and opportunities that are hidden in the here and now. They’re hidden because they are not quite the same, but nor are they completely different. This ‘not quite-ness’ is fertile ground for spotting the vital signs of change sooner.

I would like to close by offering you 5 top tips for reflecting on the future: 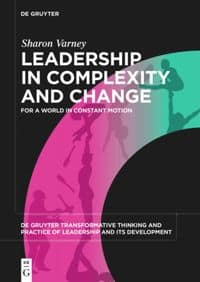 Sharon VarneyLeadership in Complexity and ChangeFor a World in Constant Motion

Dr Sharon Varney is a specialist in developing organisations and people. She is the Director of The Henley Forum at Henley Business School, UK, and runs her own organisational consulting practice space for learning.