As a theatrical genre, tragedy has been with us for more than 2,500 years. Over the centuries, the term found applications not only in theater, but also in philosophy, psychology (both individual and social), social protest, and even burlesque. While we all think we understand what is meant by ‘tragedy’, the term can also lead to much confusion, because it can refer to a condition, to the sentiment evoked by this condition, or to the type of action undertaken to change this condition.

Appeals for greater self-reflection in order to escape the tragic cycle sound particularly odd when paired with assertions that the tragic condition is inescapable. The frustration of those who, like literary scholar Terry Eagleton, assert that “no definition of tragedy more elaborate than ‘very sad’ has ever worked,” is therefore understandable.

“I believe that recovering the civic function of tragedy could be a valuable tool for healing social and political divisions today.”

But also quite wrong. In the fifth century BCE, the performance of tragedy became an essential component of Athenian civic discourse, an institution that taught citizens how to grapple with the political and social crises of the day. It was the beating heart of Athenian democracy on public display. I believe that recovering the civic function of tragedy could be a valuable tool for healing social and political divisions today.

I rely on Raymond Williams’ definition of tragedy, which comes close to that of the ancient Athenians by focusing on the political and social consequences of tragic actions. According to Williams, “tragedy rests not in the individual destiny… but in the general condition, of a people reducing or destroying itself because it is not conscious of its true condition.”

The condition that Williams is referring to is not specific to any one country, time, or conflict. Rather, it reflects our shared failure, as human beings, to acknowledge what Hans J. Morgenthau referred to as “the frailty of human reason, carried on the waves of passion. In that frailty all men share; Greeks and Persians, Americans and Russians. Beholding them as brothers in blindness, we can be just to them.”

One reason for that frailty is an obsession with justice, which people often confuse with vengeance. The understandable desire for retribution tends to obscure the common aspects of tragedy in which all human beings share, and thereby blind us to the compassion needed to bind society and heal its wounds.

In the case of Ukraine, decades of nationalistic policies have divided Eastern and Western Ukrainians over issues of language, religion and cultural affiliation, and in the process eroded the bonds of civic identity. The resulting tragic cycle has been further fueled by the destructive narratives that each side tells about the other, which are then used to promote conflict in the name of achieving justice. Trapped by their insistence on correcting the injustices of the past before engaging in dialogue, both sides have unwittingly contributed to the perpetuation of their mutual tragedy.

“Greek playwrights hoped to lead audiences to catharsis, a purging of emotions so powerful that it makes space for emotions such as pity and compassion to enter the soul and take the place of rage.”

For the ancient Greeks, therefore, tragedy occurs when individuals cannot see how much their own actions have contributed to their current predicament. The solution, they argued, was to focus on the crucial link between agency and catastrophe, and expose the hubris that prevents men (and nations) from grasping the true meaning of justice—which is mercy.

They sought to do so by recreating on the stage the horrors that result from the unyielding pursuit of vengeance. Greek playwrights thereby hoped to lead audiences to catharsis, a purging of emotions so powerful that it makes space for emotions such as pity and compassion to enter the soul and take the place of rage. Aristotle thought that catharsis could liberate individuals and societies from the endless repetition of a tragic script by bringing the spectators to realize how their own lack of compassion had led them to ruin.

How Can Tragic Therapy Be Applied Today?

When political life is divorced from tragedy, the self-destructive implications of one’s own behavior become hard to discern and are easily brushed aside. The public performance of Greek tragedies during the annual civic festivals known as the Dionysia sought to reconnect politics with tragedy by exposing citizens vicariously to the devastating consequences of choices that could easily have been their own.

Athenian society valued dialogue above all else, and classical Greek tragedy may be thought of as a series of dialogues that seeks to expose citizens to their own tragic flaws. It was believed that only when citizens began to grasp how their own actions stoked the hatred of others, could they imagine a different path.

But while the Athenian polis was small enough to engage nearly every adult member of society in these civic rituals, there seems to be no mechanism in modern society that can perform the same function today. A comparable process, however, has been around for more than forty years and been implemented in over 50 countries—truth and reconciliation commissions.

“Like the Dionysia of old, such commissions try to heal deep social trauma and bring about social reconciliation.”

Like the Dionysia of old, such commissions try to heal deep social trauma and bring about social reconciliation. In my book, I look at how such commissions have worked to transform South Africa, Guatemala, and Spain. Each of these examples, I feel, has something to offer Ukrainian society.

In South Africa, the Anglican Church, and Archbishop Desmond Tutu in particular, played a key role in transforming a situation that was fraught with the potential for violent retribution after the end of apartheid into one of forgiveness and healing. In Guatemala, the commission (known locally as the Historical Clarification Commission) helped to promote a national discussion of the country’s contentious history of genocide, despite the military government’s reluctance. And in Spain, the pact among the country’s political parties to literally forget the past (Pacto de Olvido) gave new democratic institutions the time to emerge. These eventually gave birth to a civil society able to re-examine this past in a new and constructive social context.

In many countries truth and reconciliation commissions have been able to replicate aspects of the therapy provided by the Dionysia by gathering and putting on public display riveting emotional testimony from all sides, thereby leading the public to catharsis—a purging of mutual hatred that allows society to heal by restoring humanity to the once enemy Other. This fits well with Raymond Williams’ assessment that lasting social harmony ultimately requires a “quite different peacemaking that would attempt to resolve rather than to cover the determining tragic disorder. Above all else, such resolution would mean changing ourselves, in fundamental ways.”

I believe that in Ukraine, a country riven by decades of internal dissension exacerbated by external intervention, a truth and reconciliation commission that gives voice to the anguish and suffering of all sides and that aims at forging a broadly shared, non-exclusive civic concept of Ukrainian identity, could make a valuable contribution to lasting peace. 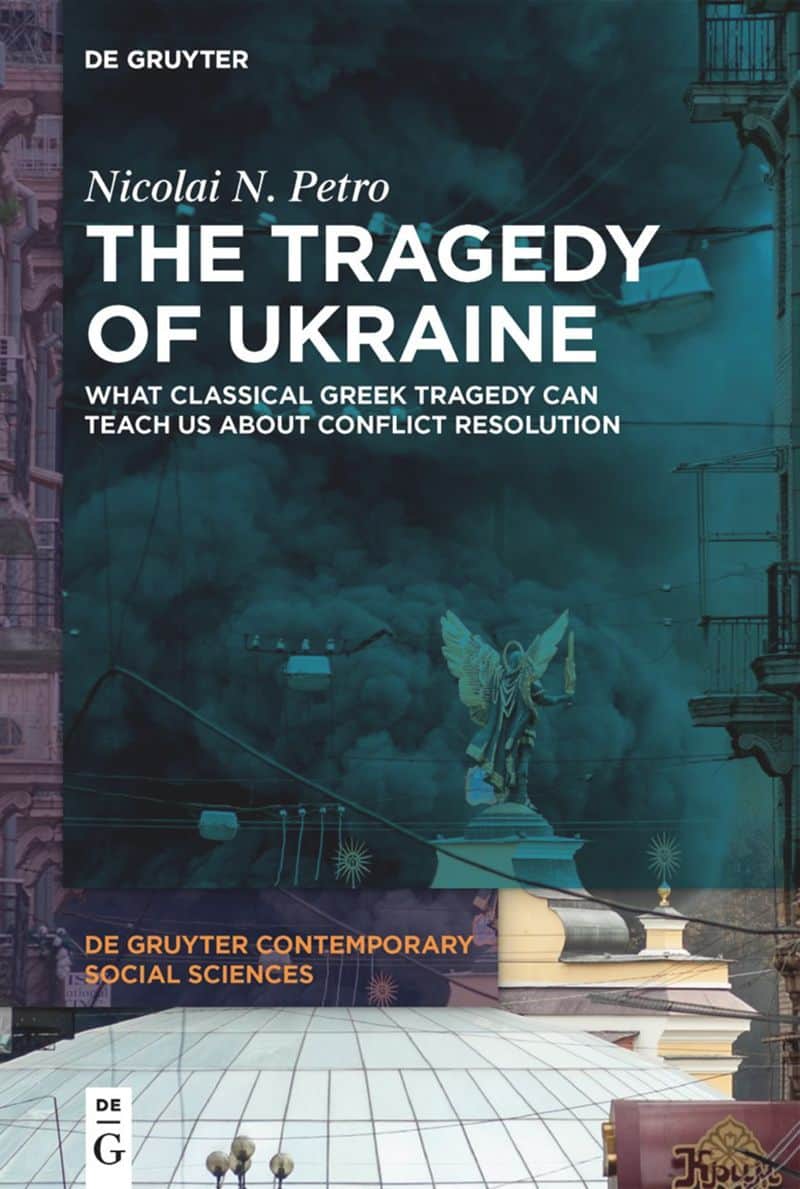 Note: An excerpt of the book was recently published in “The Nation”, one of America’s oldest political commentary magazines.

[Title image by maxsyd/iStock/Getty Images Plus]

Nicolai N. Petro is a Professor of Political Science at the University of Rhode Island, specializing in Russia and Ukraine. His professional focus is on the role that religion, history, and cultural symbols can play in democratic development.