As part of our series examining the world’s collective drive to digitise book archives, to further research and reliably preserve history of the arts, humanities and sciences, we recently invited librarians and researchers to talk about the importance of archives to their work and wider community.

“Archives are special. They are the homes for our collective memory. We use them to help understand the past, make sense of the present, and to guide us for the future. Our ability to preserve and make available digital records will decide what evidence people in the future will have of today. Archives need to develop extraordinary capabilities to ensure digital records can be kept.”

In this article, we explore the relevance of book archives in Maths and Science with two of De Gruyter’s acquisitions editors: Dr. Apostolos Damialis and Dr. Mareen Pagel. We ask how books that are decades, even centuries, old have influenced authors and scholars in their field right up to today, and are still inspiring and informing new books.

Influencing scholars for over a century.

There are around 300 titles in De Gruyter’s Chemistry back catalogue that are being added to its growing digital book archive. Chemistry Acquisitions Editor, Dr. Mareen Pagel has hand-picked some of the oldest and most significant titles in her field and considered these in terms of how they’ve laid the foundations for subsequent ideas and breakthroughs since the end of the 19th century. With subjects ranging from basic and material knowledge of inorganic and organometallic chemistry, to practical guides laying out methods, calculations and applications for laboratory work, these titles have influenced the thinking and practices of students, academics and scientists for over a century – and are still shaping today’s lectures, courses and methods today.

“Whilst chemists tend to prefer the most recent versions of books to refer to for their work or study, the origins of those titles and many of their most significant theories still applied today, are over 100 years old in many cases.”

The trajectory of some of the most well-known chemistry titles spans decades, with some original theories and ideas still developing today. Amongst the most well-known and high impact titles in De Gruyter’s Chemistry list are: Lehrbuch der Anorganischen Chemie (Holleman Wiberg); Analytik: Daten, Formeln, Übungsaufgaben (Friedrich Wilhelm Küster / Alfred Thiel); Maßanalyse (Gerhart Jander, Karl-Friedrich Jahr); and Allgemeine und Anorganische Chemie (Erwin Riedel / Hans-Jürgen Meyer). Several of the original authors of these titles went on to produce numerous editions over many years and then passed the baton on to a series of succeeding academics to expand, refine, and even refute ideas in the original works – bringing about advancement in the subject.

Possibly the most significant book in Chemistry for over a century is Anorganische Chemie, a title whose 103rd edition was published by De Gruyter in 2016 and whose first edition (Lehrbuch der Anorganischen Chemie) was written by the Dutch chemist Arnold F. Holleman in 1898. The scope of this book (referred to many today simply as ‘HoWi’), has expanded over decades, with the latest edition spanning two volumes. From its original pages published over a hundred years ago, more than a hundred titles and a century’s worth of evolving theories were born, finally resulting in what is considered in Germany today, ‘The Bible of Inorganic Chemistry’. 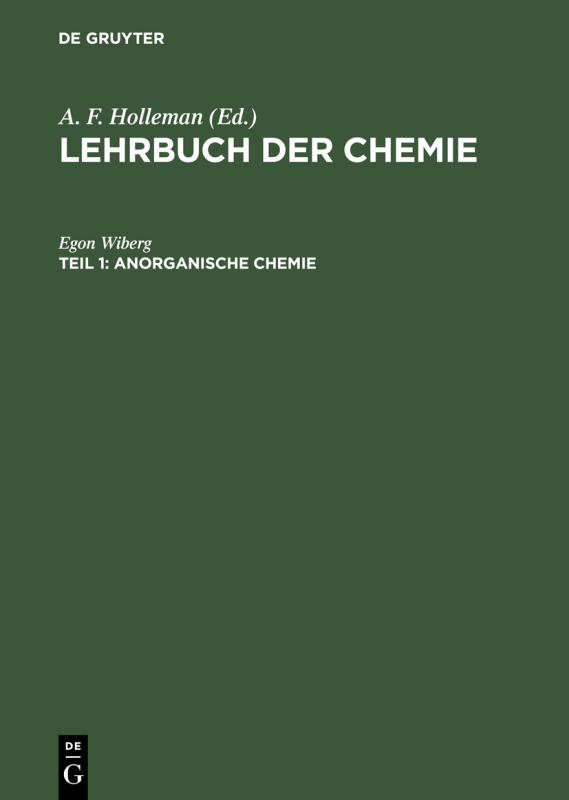 With universal appeal, the book is relied upon today both by chemists at the very cutting edge of research, and Gen Z students embarking on undergraduate courses. Part of the reason for the title’s popularity is that it combines a reference book and textbook in one, and so gives a strong introduction to students, but can also be applied by advanced scholars as well. Today, 120 years on from the publication of its first edition, Anorganische Chemie is considered the gold standard for lecturers in Chemistry. Extending to over 2,600 pages and with earlier editions published in English and Italian, it’s difficult to overestimate the level of influence this title has had over its lifetime as well as the significance of new ideas it has given birth to.

There are many other older Chemistry titles whose original methods, calculations and applications are widely referred to and used today. Analytik-Daten, Formeln, Übungsaufgaben by Friedrich Wilhelm Küster and Alfred Thiel is a great example of this. First published in 1894, the book has had three different titles in the intervening period and has grown hugely in popularity. Its latest version, published in 2016, is relied on by university students and lab practitioners alike. Today, anyone wanting to apply methods described in the book would generally refer to the latest version because of number of corrections and improvements that have been made since then. Nevertheless, the first edition of Rechentafeln für die chemische Analytik is a fundamental title for research and study in the field of chemistry today.

Other significant historic titles that continue to have new editions published and read by academics today include, Maßanalyse. Written by Gerhart Jander and Karl-Friedrich Jahr, the first edition was published in 1935, with its latest edition well-known and used today by first-year undergraduate students, mainly for their lab course in quantitative inorganic chemistry. Published over 80 years after the original, the 19th edition is the foundation of Chemistry higher education, well into the 21st century.

Whilst many of the concepts developed by authors of the first editions of these defining titles have evolved over time, they were the precursor for over 100 years of progress in the field of chemistry. Demand for new editions of the titles not only underlines the influence of their most recent authors, but also stems from the fact that many of them compile the combined knowledge of several researchers. And the knowledge ripple effect of these authors is huge – inspiring many related titles over the past century. They also play an important role in the insight they give to historians about how these ideas led to today’s methods and practices.

Some of the oldest books in De Gruyter’s archive are in Mathematics – a field that extends further back than other scientific titles. This is also due to the oldest maths journal, Crelle’s Journal für die reine und angewandte Mathematik – one of the top maths journals in the world and a flagship title for De Gruyter, which will celebrate its 200 year anniversary in 2026.

“Maths and Physics are notable in terms of the significance of their archives. These disciplines develop along a continuum, referring to previous works as they evolve over decades. Theory builds on theory over time to become complete.”

A good illustration of this is the two-volume work Sets, Functions, Measures (2018), written by Russian authors Valeriy K. Zakharov, Timofey V. Rodionov and Alexander V. Mikhalev, which is an evolution of the book Grundzüge der Mengenlehre (Basics of Set Theory). It was first written 100 years ago by author Felix Hausdorff and published by Veit & Company – a publisher that later merged into De Gruyter. The original work has had a profound impact on the advancement of Maths and Theoretical Computer Science, and is still inspiring new publications today. With Grundzüge der Mengenlehre, Hausdorff presented the first comprehensive introduction to set theory through a systematic treatment of known results. Over time, the concept of proof in mathematics has been continually reworked and simplified:

“Maths builds on maths. There are many important books that maintain their influence over decades – original editions that some academics and scientists want to revisit in order to inspire new and original research. But mostly, historic titles such as Hausdorff’s are built on and refined by later editions or by other important works like the Bourbaki series.”

Part of the reason this title is so significant is not only its lasting legacy that sees today’s mathematicians refine and build on notions introduced there, but also because in writing it, Hausdorff showed how set theory could be used as a working frame for mathematics more broadly. This first edition not only influenced subsequent editions, but many other significant titles on set theory and other branches of mathematics. When Hausdorff revised his opus magnum for a second edition as a textbook in the late 1920s, he removed parts on ordered sets, measures and integration, but rewrote those on descriptive set theory completely. In many cases, early editions don’t only serve as a platform for other academics to advance ideas, they also serve as a way for the author to develop his or her own approach and concepts over time.

“This one title set in motion a chain of events that would ultimately unite arithmetic, algebra, geometry, analysis, and other domains of mathematics, into one subject. In his 1914 book, Hausdorff described the foundations of mathematics as a tree, with set theory as a trunk and all of the separate domains of mathematics branching out. Hausdorff’s and Bourbaki’s books led the way in consolidating mathematics under one collection of basic building blocks: elements, sets, structures, and systems.”

Today, Hausdorff’s text is still a must-read for training mathematicians who need to understand the very foundations of their discipline. Set theory evolved quickly after the publication of Grundzüge der Mengenlehre and this branch of mathematics looks very different today from how it did in the early 20th century. However today’s more advanced theories and formulations certainly owe at least some of their influence to that first edition of Hausdorff’s.

Charting the evolution of research

The importance of capturing and preserving digital records to drive future developments in science and technology is better acknowledged today. But the ways in which archives are curated; how easy the platforms on which they sit are to search; and how quickly material can be retrieved, make the difference between titles that stay lost to obscurity, and those that once again inspire new discoveries or cement understanding. Digital archives should not only give access to the oldest titles, but also chart the evolution and findings of all subsequent titles to build a truly meaningful record of history and help academics really master their subjects. 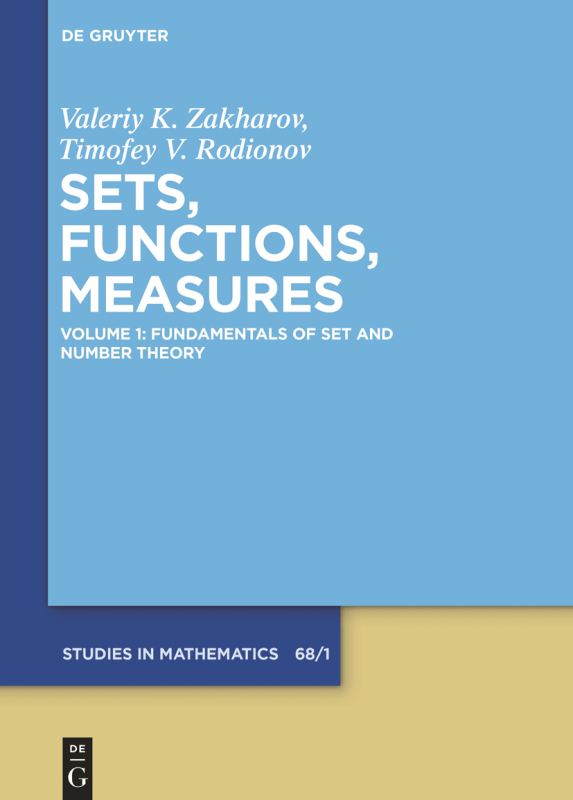 Emma Warren-Jones is Director of Edible Content. She works with publishers and edtech organisations across the globe and is based in London, UK.