In 1883, Jerusalem antiquities dealer Moses Wilhelm Shapira presented a number of ancient biblical texts to the public. The 15 fragments that he supposedly found in a cave near the Dead Sea were made of leather, heavily darkened and almost illegible. It seemed too good to be true – Shapira claimed that the Hebrew text depicted an ancient version of Deuteronomy, the fifth Book of Moses.

He reportedly offered his discovery to the British Museum for one million pounds, but shortly after, scholars denounced the fragments as forgeries. Shapira’s life went on a downward spiral, ending with his suicide in 1884 at the age of 54. The manuscripts were sold for £25 to a private collector and their whereabouts are no longer known.

This could have been the end of the story – it seemed like it was for over 130 years – but now, a young Israeli-American scholar challenges the long-held claim about the Shapira scroll being a forgery. Idan Dershowitz, who currently works at the University of Potsdam, thinks that the texts might have been real after all. In fact, they could be the oldest biblical texts ever found. Now he is trying to prove it, with an abundance of textual, linguistic, and archival evidence.

The New York Times recently featured his findings and hypotheses in an intriguing report by culture reporter Jenny Schuessler. We wanted to learn more about Idan Dershowitz’s personal journey, his approach to criticism and his newfound “fame”, so we got together for an interview.

De Gruyter: How did you get into biblical studies?

Idan Dershowitz: That happened when I was studying in a yeshiva, which is sort of a post-High School advanced religious studies environment. It’s not academic, and it’s focused on studying the Talmud and, to a lesser extent, the Hebrew Bible. During my time there, I came across some academic books on biblical studies in the library and they appealed to me very much. I realized that I had studied the Bible my whole life up until then but only through a traditional lens. It was exciting for me to see new approaches to answering the sorts of questions I had been asking my whole life about the texts of the Bible.

At the time, I thought I was going to study math and physics at university, but I gradually shifted away. At first, I said, “I’ll major in math, but I’ll do a minor in Bible”, then “I’ll major in Bible and minor in math”, and eventually I just settled on biblical studies.

DG: What got you interested in the Shapira scroll in the first place?

ID: For several years, I had seen occasional discussions in the popular press about this intriguing character and his famous forgery. There was a lot of drama in the story, so that drew me into it. At one point I just realized that all of these discussions about whether the manuscripts are authentic or forged were talking about the individuals and the circumstances of the alleged discovery, and what the leather looked like and things like that, but not about the text. I’m trained in philology and studying texts and relationships between texts, so I was just really curious to see the text of these manuscripts, which at the time wasn’t so easy to find. But once I did start finding 19th century transcriptions of the manuscripts, I felt almost immediately that it can’t be the forgery that people have said it is, and furthermore that it can’t be a text that is inspired by Deuteronomy or based on Deuteronomy, but actually the other way around.

“I didn’t want too many people to think that I was a crackpot.”

DG: Was there a specific moment when you realized that you were on to something special?

ID: Yeah, I think it was in the initial 48 hours. I became quite obsessive about the text and I just kept on reading it, comparing it to Deuteronomy and also making tables, aligning the two texts. I felt almost immediately that it had to be authentic, and that it had to be proto-Deuteronomic, but I realized that that was a crazy thing to say. So, at first, I told a couple of people about it and asked to speak to them in confidence, but I didn’t want too many people to think that I was a crackpot (laughs).

In the beginning people were pretty skeptical, but the more I heard the critiques, the more I felt like there were answers for them and that it all made sense to me. So, I basically spent all the time from that point, three and a half years ago until last week, just trying to build a stronger and stronger case – with different types of evidence, more detailed analyses, and more examples that illustrate the point that I’m trying to make, because I realized that the bar is extremely high for convincing people. And still many people are going to remain skeptical unless we can find the objects, so I just wanted to have the best case that I could. That’s also why I kept the project a secret. My mentors advised me to keep it under wraps for as long as possible, so that nobody hears half of the story and rushes to judgment based on that.

DG: Your research has received quite some pushback in the past. How do you deal with that?

ID: One of the things about my background – the time I spent in the yeshiva, but also the culture I come from more broadly – is that the way that I have been trained to think is through argumentation. I enjoy arguments, I enjoy people saying, “What you’re saying makes no sense, it’s definitely wrong because of …” and then responding to those reasons. I feel that has sharpened my thinking and that it has improved my argument immensely. Many critiques that I heard along the way were things that I hadn’t thought of before. Finding explanations for those points helped me improve my work, so I did enjoy it.

DG: Your project is definitely not a secret anymore. What does it feel like to be featured in the New York Times?

ID: It’s very, very exciting. I don’t think I was prepared for this amount of attention and focus on my work. It has been difficult but enjoyable and I feel extremely fortunate that this happened, because one of my dreams from very early on was to help show the world what an exciting field biblical studies is. I think that it’s really a fascinating discipline and it has a lot more relevance to people’s lives and way of looking at the world than most people realize, and I feel like this is a wonderful opportunity to engage people who otherwise might not have heard about this little niche of academia that I inhabit. So, I’m very happy for that.

DG: How have the reactions been so far?

ID: There have been reactions from across the spectrum. I’ve received many very supportive correspondences. There are some people who have been extremely critical, including one of the people who is cited in the New York Times, Christopher Rollston, who has since published some more thoughts on this and remains convinced that the fragments must be forgeries. But I feel that most of the people, so far, who are utterly convinced of forgery haven’t yet engaged with my new book on the subject. So, for example, Christopher Rollston’s long piece doesn’t actually engage with my philological argument about literary dependencies at all. I’m looking forward to seeing some detailed assessments of that.

My article in Zeitschrift für die alttestamentliche Wissenschaft reviews some of the criticisms of the fragments, and it also mentions new documents of Shapira’s that I found in Berlin that I think undermine the narrative that he forged the documents. But in my book, The Valediction of Moses: A Proto-Biblical Book, I also have a section where I compare the text in these manuscripts with Deuteronomy, and to me that’s the heart of my new work. I’m very much looking forward to hearing what people have to say about that.

DG: What are you working on at the moment?

ID: This project has forced me to shelve all sorts of project that I was planning on working on. I thought that once the article and book come out, I’ll be able to just return to those projects, but I’m not sure that’s going to happen so quickly. My next few articles, I think, are going to be related to this topic.

I have an article that’s just about finished that I’ve written with the linguist, Na’ama Pat-El, who also co-authored one of the chapters in the book, about the semantics of some ancient Hebrew words that these manuscripts help us understand. I have some other articles that I have in mind relating to the development of the biblical book of Numbers, where, again, I think that these manuscripts are extremely helpful. I think there’s a whole world of knowledge that this opens up, and so far I’ve only scratched the surface. I’m excited to do some more work on this project, and I’m particularly eager to see what other scholars come up with in the years ahead. 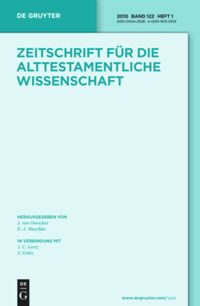 Prof. Idan Dershowitz is Chair of Hebrew Bible and Its Exegesis at the University of Potsdam. Previously, he was a Junior Fellow at the Harvard Society of Fellows.