Consider a comparison of the coronavirus with the plague. Nothing seems to be more connected with the “Black Death” in the 14th century in the popular imagination than rats, even though the bubonic plague was largely spread by human fleas and person-to-person contact. In the case of COVID-19, it is the pangolin (and more lately the bat) that has emerged as the index species for the pandemic. But whereas rats were made into pests and exterminated, the pangolin today, under changed historical conditions, does not draw the same scorn for transmitting the virus.

However, in both cases, approaching the history of pandemics by centering nonhuman animals complicates our projections and narratives surrounding these events. Rather than being the origin of the plague, rats, for example, were its first victims, equally beset by the fleas that transmit the bacterium as humans. And whereas the pangolins were pitied, at least in the West, for their fate as commodities, exploited for their leather, meat, and scales used in traditional Chinese medicine, such sympathy can shift quickly when the species (and space) of concern changes.

In Europe, farmed minks were being killed preemptively by the millions in a bid to suppress further mutation and transmission of the novel coronavirus. What separates the socio-ecological situation of plague and rat from COVID-19, pangolin and mink, of course, is the history that weighs differently on animals in different places at different times owing to the different relationships that humans have with them.

“Animal history seeks to unpack human-animal relationships in the past, trace changes over time, and evaluate the impact animals have on human history and human histories on them.”

Thus, history matters to animals as animals matter to history. Indeed, not only is there no human history without the participation of animals, but animals also forcefully shape human histories. Inspired by the interdisciplinary field of human-animal studies, animal history seeks to unpack these relationships in the past, trace changes over time, and evaluate the impact animals have on human history and human histories on them.

In the case of the two pandemics, pangolins and rats provide convenient anchoring points and junctions to make sense of the uncontrollable and untraceable paths along which diseases and pandemics travel. But they also satisfy our desire for a point zero, an origin, a source that helps humans to begin telling the disease’s history. Humans turn to animals to make sense of our shared world, reminding us of how looking at animals provides opportunities to brush histories against the grain while prompting us to investigate how animals have dynamic histories of their own.

The surge of interest in animal history thus seems little surprising. People are interested in animals precisely because they have a central place in human cultures. And the ways in which animals take on diverse roles, both in terms of their symbolism and in terms of their material being, is part of looking at these animals as members of society.

A History beyond Humanity

To tell history in such animal-conscious or integrated ways, of course, faces methodological challenges. How can we understand and find animals, who tend not to write and tell their stories in ways that are readily accessible by human language, in archives and past societies? Can humans access the perspective of animals within history? And can animal historians write and represent history in a non-anthropocentric way?

Animal historians have begun to read source material on biological evolution next to cultural texts in ways where culture itself is regarded from the beginning as being co-constituted alongside, with the help of and in co-operation with animals. This includes a radical expansion of the source material that might help to tease out animals’ histories.

Alongside “classical” archival sources detailing, for example, dog-taxes, slaughterhouse regulations or zoo architecture, and visual sources that paint a picture of past relations in prehistoric caves, at medieval courts or in industrial cities, animal historians are turning to changes in landscapes, looking at how herd grazing, hunting practices or acclimatization of non-indigenous animals have left their mark.

In focusing on how interspecies relationships were lived, the material remnants of past relationships in the form of leashes, milk-stools or stirrups, but also of dog-beddings and cat toys that speak for the close bond between the species, are used as interpretative tools for a history that travels beyond the human.

“Tapping into knowledge about how animals experience their world enriches our understanding of the living world.”

Likewise, animal historians are moving past disciplinary confines, drawing especially on ethology to make the historical and social entanglements between humans and animals more visible. Tapping into knowledge about how animals experience their world, seeing their behaviors as affected by the environments they live in, enriches our understanding of the living world. In such a multi-perspectival way, anthropology also has helped to define anew how social life is structured beyond the human and how it builds on shared interspecies lives.

Placing nonhuman animals at the center of a traditionally anthropocentric field such as history is tied to the hope of giving a more vivid – and accurate – picture of past societies as well as expanding the scope of those deemed worthy of having a history beyond the human. 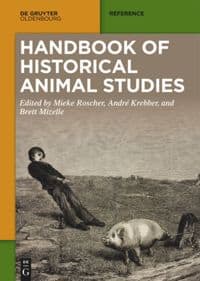 André Krebber is Assistant Professor for Social and Cultural History and the History of Human-Animal Relations at the University of Kassel.

Brett Mizelle is Professor of History and Director of the American Studies Program at California State University Long Beach.

Mieke Roscher is Associate Professor for Social and Cultural History and the History of Human-Animal Relations at the University of Kassel.