The image of the United States abroad suffered greatly during the presidency of Donald Trump. It suffered not only because of Trump’s incompetence and disrespect for international norms of diplomacy, but also from his apparent campaign to move the United States toward a more authoritarian form of government, erasing standards that had been set by Republican and Democratic presidents alike over many decades. Yes, the world was watching and wondering whether the Trump presidency would be the future for the country that had once sought to lead the world, guided by the beacon of democracy and human rights.

Trump laid down a process of governance set on a purely transactional foundation. This appealed to enough Americans to get elected and then to govern for four years, but not enough to win a second term. The foreign policy implications of this approach to governance produced rewards for those countries that bowed down to Trump’s personal and policy preferences and threatened distancing for those that did not. But, at least for the democracies around the world that had seen the United States as a model, the United States had abandoned this role, producing a huge vacuum internationally that could not be filled by any other nation.

The Trump approach to U.S. foreign policy, which oozed affection for several dictators and showered criticism on traditional U.S. friends and allies, very quickly dissipated what is known as America’s “soft power,” which had provided the fuel required for countries to admire and follow the United States based simply on the essence of the nation.

The starting point for examination of Biden’s chances for success is the situation he confronted when winning the presidency over the incumbent. There were continuities and discontinuities between Trump and traditional contemporary U.S. foreign policies. But Trump brought certain distinct elements to the presidency based on his narcissistic personality, inexperience, and blatant self-interests. He left his successor with a huge challenge of trying to rebuild the U.S. leadership role in the international system, regaining the trust of its main allies, and reorienting American foreign policy toward authoritarian regimes and leaders.

Some countries and rulers obviously appreciated Trump’s approach (particularly Israel and Saudi Arabia). Some were particularly troubled by Trump’s rejection of multilateralism and alliances (including Germany and many members of the European Union). Some others tried to use Trump’s proclivities to advance their interests (including France, North Korea, Russia, and China). This left huge challenges for Biden’s goal of re-establishing principled U.S. international leadership.

“The leading goal was to restore American respectability and leadership internationally.”

What was Biden’s game plan? Biden’s goals were quite well outlined in speeches and articles published during the presidential campaign and in his early months as president, as well as during a lengthy career as U.S. Senator and Vice President to President Barack Obama. The leading goal was to restore American respectability and leadership internationally. Trump did not create all the issues confronting Biden. Parts of the challenge either pre-dated Trump or were not caused principally by Trump’s conduct of U.S. foreign policy, including the on-going conflict in Afghanistan. But Trump aggravated old issues as well as creating new ones.

Biden’s approach was to link his domestic policy objectives — in the areas of the pandemic, systemic racism, political equity, the economy, immigration, and climate change — to his foreign policy goals. To the extent that American soft power – the ability to get countries to follow or emulate the United States without coercing or bribing them – is dependent on these aspects of Biden’s presidency, they play into his attempt to restore America as a democracy worthy of emulation. The fact that the opposition Republicans decided to cling to the leadership of their defeated president created special challenges, as did the fact that Biden’s Democratic Party control of both the House and the Senate hang by an electoral thread, threatening to snap in the 2022 mid-term elections.

In his first months in office, Biden went to work pursuing his domestic agenda while seeking to create new expectations about U.S. foreign policy goals and practices. The results were mixed, as the Republicans refused to cooperate with Biden’s goals of bipartisanship and national unity while the international scene proved complicating as well.

As the Biden presidency developed, complex challenges arose to put his success in question. In some ways, the domestic challenges were even more daunting than the foreign ones. While foreign governments – friends and adversaries alike – helped create the circumstances with which the Biden administration must cope, the domestic environment directly affected Biden’s ability to govern and therefore to implement foreign and defense policies required by the objectives he had set.

“If Biden’s party loses control of the House or the Senate in 2022, his domestic agenda will be brought to a screeching halt.”

What are Biden’s chances of success? On the domestic side, he has made some progress, even though it has been more difficult and slower than he would have liked. He has encountered obstacles not just from the opposition Trump-led Republicans, but also from splits between “moderates” and “progressives” in his own party, demonstrating how complicated it can be to lead a “big tent” political party.

The ultimate answer to the question of success or failure will be produced by the mid-term elections in 2022 as well as the presidential voting in 2024. If Biden’s party loses control of the House or the Senate in 2022, his domestic agenda will be brought to a screeching halt. The United States could move back toward the radical right path that was being laid by former President Trump.

The bottom line is that if Biden’s approach is successful at home, he will have a good chance of restoring American respectability and leadership abroad. But that success is not guaranteed, and in fact may be no more than a 50-50 proposition. 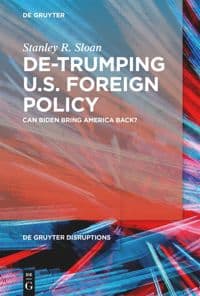 Stanley R. Sloan is one of America’s top experts on transatlantic relations. He is the founding Director of the Atlantic Community Initiative, and a Visiting Scholar at the Rohatyn Center for Global Affairs at Middlebury College.