This is the eighth article to commemorate the “International Year of the Periodic Table of Chemical Elements (IYPT2019)” by the United Nations General Assembly and UNESCO. Read the previous article here and stay tuned

“Swift fly the years” wrote the English poet Alexander Pope (1688-1744). Indeed, in 2019 the Periodic Table of the Elements (PTE) turns 150 years old. This anniversary of the PTE calls for a special recognition of LEAD (Pb). It is one of the oldest metals known to mankind going back to the early Egyptians and Hebrews. Its toxicity was recorded by Greek and Arab scholars. Pb was mined in Spain as early as 2000 B.C. and there is a figure of lead in the British Museum that is by now nearly 6000 years old.

Lead doesn’t have any known biological role; its essentiality has been discussed but not demonstrated.

Lead is the most abundant of the heavy metals in the Earth’s crust; it occurs in ores of zinc, silver and copper. Compared to other metals Pb is rather immobile in the environment, but still its biogeochemical cycling is greatly perturbed by human activities. They contribute to the metal’s mobilization in the biosphere which is due to its high volatility, low melting point and large radius. Lead is transported in the ecosystem by precipitation from the atmosphere to soil and water, uptake by plants and animals and re-entry into the atmosphere. At sites more strongly impacted by mining and urbanization Pb is found at high nano to low micromolar concentrations in surface waters, yet it can even be higher in soils and sediments.

The use of lead peaked during Roman times and the Industrial Revolution. Wealthy Romans suffered from lead poisoning because “leaden” vessels were used for cooking, storing wine and acidic fruits and for water piping. In addition, lead-containing sweeteners were consumed. In the past 100 years Pb was extensively applied in piping and plumbing, as well as in paint pigments, alloys, batteries, pottery glazing, toy production, etc., and as an additive to gasoline, a use that is now banned. Due to such (partly past) anthropogenic activities lead, remains a persistent environmental contaminant and a public health hazard. Lead interferes with the metabolism of essential metal ions relevant for mammals. This is outlined in the Figure below (related to ideas of R. B. Martin), where an arrow from element A to B indicates that administration of element A may reduce the toxicity of element B. Thus, the toxicity of Pb2+ may be reduced by Ca2+, Zn2+, Cu2+, and Fe2+, as well as by phosphate (P). 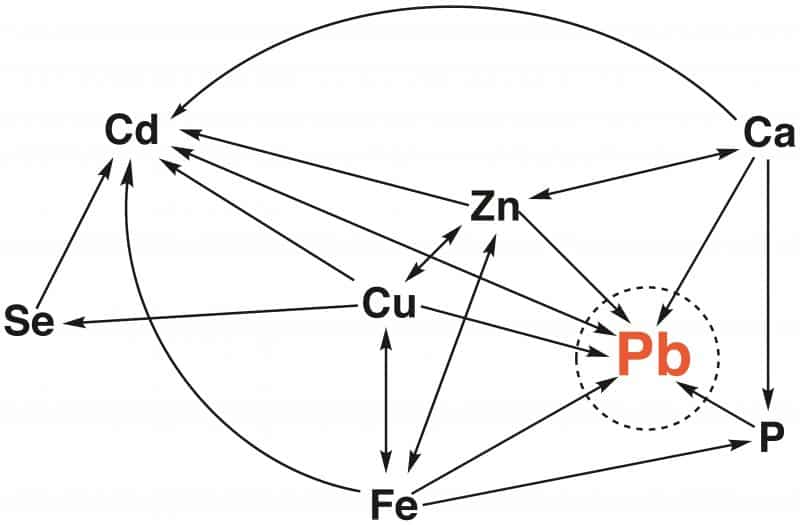 Astonishingly, the  main group element Pb2+ can mimic the 3d-transition element Cu2+ and also the s-element Ca2+  behaving thus like a chameleon; this is because of the ambivalent coordination sphere of Pb2+. This ambivalency results from the special electronic configuration of this element which can give rise to low or high coordination numbers. Therefore the coordination chemistry of lead(II) is complicated with varying coordination numbers ranging from 4 to 10.

Pb2+ is readily absorbed in the gastrointestinal tract and primarily bound to erythrocytes with a half-life (t1/2) of about 1 to 2 months. It is further accumulated in the kidney (t1/2 ca. 7 years) and in bones (t1/2 ca. 30 years). Indeed, 95% of the body burden of lead is stored in bones. If in later years osteoporosis occurs, this lead is released and exerts its inherent toxicity. Lead produces adverse effects in mammals by acting on the nervous system giving rise to neurotoxicological effects, inducing inflammatory responses, modulating the immune functions, leading to anemia, affecting the cardiovascular system, the genetic and reproductive machinery, etc.. Furthermore, as indicated already above (see the Figure), Pb2+ affects the metabolism of essential metal ions. Moreover, the US Environmental Protection Agency (EPA) concludes that there is no safe exposure limit. 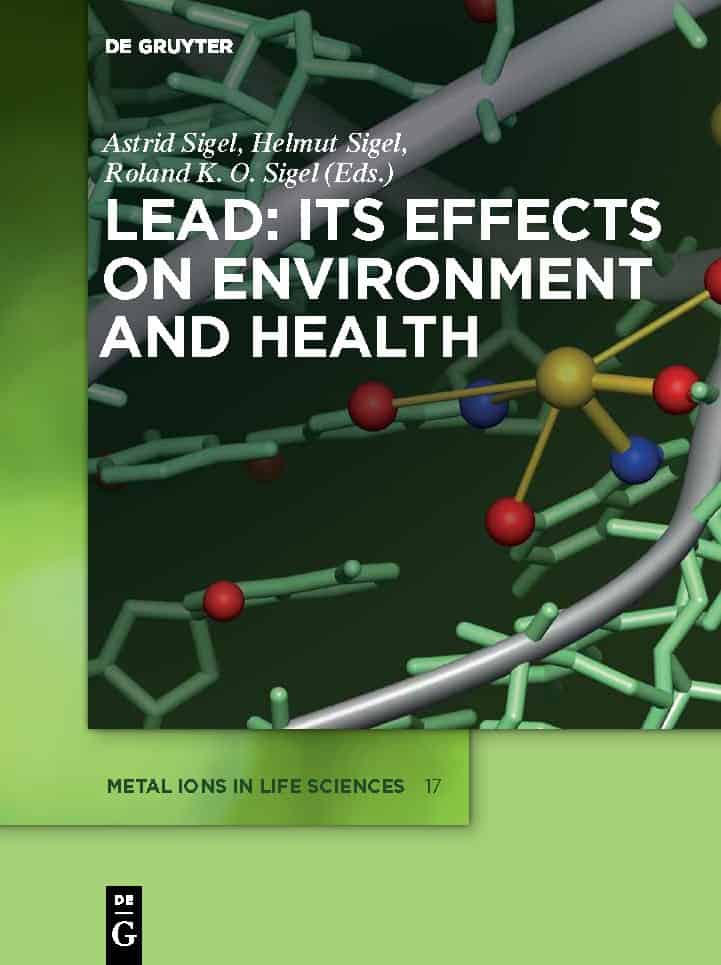 Astrid Sigel (University of Basel) was an editor of the Metal Ions in Biological Systems series and of the Handbooks on Toxicity of Inorganic Compounds, Metals in Clinical and Analytical Chemis-try, and on Metalloproteins. She is also an editor of the MILS series and coauthored about 40 papers on topics in Bioinorganic Chemistry. Helmut Sigel is Emeritus Professor of Inorganic Chemistry at the University of Basel. He participated in the same works as A.S. and received many honors worldwide. http://www.chemie1.unibas.ch/⁓Sigel/index.html