The ever-increasing urgency that activists emphasize when it comes to addressing the crises of anthropogenic climate change that we – as well as many other species inhabiting this planet – face has been carrying connotations of impeding apocalypse for years. Amidst the fires and floods and droughts and storms that have destroyed people’s homes and cost many their lives and dominated news cycles in the last few months, the vocabulary of catastrophe has included phrases like ‘biblical proportions’ or ‘apocalyptic’, as new words like ‘doomscrolling’ have been added to it.

Some “sceptics” draw on this semantic field in an almost patronizing effort to belittle particularly the younger generations’ fears as exaggerated, even hysterical, prophecies of doom. However, considering climate change and our hopes of (and failures in) mitigating its effects through the lens of apocalyptic narrative can offer us an opportunity of critically reflecting on the current moment in history.

The kind of apocalyptic thought that has saturated parts of public discourse and popular culture, already before the pandemic but certainly since it has spread across the globe, has been used as a meaning-making tool, primarily in a secular sense, to process the collective experience of rapidly moving from one catastrophic event to the next. But, with the reality of the warming planet becoming more directly palpable in the more and more frequent extreme weather events and the substantial body of scientific research on climate change, the images and language commonly associated with apocalypse appear as an appropriate framework of reference to imagine the dimension of cataclysmic changes humankind is likely to be confronted with within the century.

“Revealing, indeed, is one of the key ideas of apocalypse, in its original sense.”

Therefore, it is worthwhile to examine what apocalyptic narrative can reveal to us, as revealing, indeed, is one of the key ideas of apocalypse, in its original sense.

Most commonly associated with the last book of the New Testament in the Christian Bible, the Book of Revelation or Apocalypse of John, the term apocalypse means revelation and describes a genre of ancient literature that encompasses many other texts besides this most famous example. The patterns that such texts have in common is that, generally speaking, the revelation they communicate is some truth about reality paired with a vision of salvation, while they are also inextricably linked to specific historical and cultural circumstances, often characterized by crisis, of the time they were written.

As a narrative framework, apocalypse lends itself to discussing climate change not just because the events described in ancient texts that envision the end of the world, or perhaps rather the end of a world, are reminiscent of today’s natural disasters as well as familiar human behaviour (especially violent conflict). We also see it fit itself into the communicative patterns of some knowing individuals and institutions revealing information about future catastrophe. Although some promise salvation in the shape of as of now undeveloped technological fixes, the notion that with a radically reduced emission of greenhouse gases we can limit global warming to 1.5 °C at least offers a glimmer of hope in an otherwise bleak outlook.

Instead of prophets receiving visions, scientists of a broad range of disciplines are presenting the public and policy-makers with empirical evidence and carefully calculated scenarios. Instead of divine entities, it is the complex interrelation of climate, ecosystems, and human behaviour that determines which of these scenarios will come closest to the actual developments of the future.

The prospect of the irreversible damage to eco systems often, regrettably, inspires fatalistic or nihilistic reactions in many of those who take climate change seriously but have little faith in responsible responses to it, not trusting politics and big corporations to consider long-term consequences instead of short-term economic interests. However, the ones who continue to fight for climate action often tap into apocalyptic rhetoric that has been adopted by environmentalists throughout the twentieth century with varying success. It certainly expresses the desperation in trying to convey how acute the crisis is, as well as the immediate necessity for changing the course away from the ecological tipping points we are heading towards at present.

“Studying apocalyptic narrative … can at least help provide some perspective on making sense of the current crises and imagine more vividly what they will mean for our future selves.”

Apocalyptic narratives provide useful structures on more than one level: Despite the chaos of catastrophic natural disasters and the devastation left in their wake, the incomprehensible dimensions of climate change become somewhat more conceivable within a format of cultural narrative that implies the course of events follows certain rules – rules that contain at least a possibility of some sort of renewal, if not salvation. Studying apocalyptic narrative – both in its ancient form as well as modern cultural manifestations as in the relatively new literary genre of climate change fiction, or “cli-fi” –  can at least help provide some perspective on making sense of the current crises and imagine more vividly what they will mean for our future selves.

Notwithstanding the spiritual consolation that religion and myth offer in the context of apocalypse, the critique of the present that is inherent to apocalyptic thinking also tends to contain utopian ideals. In turn, discounting demands for a greener, more sustainable future as too ambitious or unrealistic thus often accompanies the rejection of an apocalyptic narrative of climate change as exaggeration. However, the imaginative capability to envision radical change and adaptation to changing physical environments relies, at least to some extent, on recognizing the imperative necessity for change that an apocalypse entails.

The challenge of this narrative framework consists in translating apocalyptic thought into action, on a collective level. On a more personal level, however, the individual apocalypses experienced in the destruction and loss of lives and homes – forests burned, houses swept away, coral reefs bleached, land degraded and dried up, humans and animals dead – require space to be grieved. What warrants the hope for renewal in this particular apocalyptic narrative is that it ultimately depends not on any divine mercy but on human action. 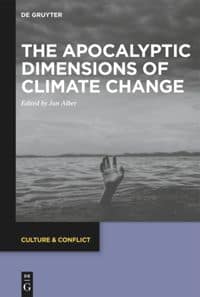 Judith Eckenhoff is Research and Teaching Assistant at the Chair of Cognitive Literary Studies at RWTH Aachen University (Germany) and is currently working towards her PhD. In her thesis, she explores the ecological estrangement of imagined fictional futures and the genre hybridisation of twenty-first century postapocalyptic fiction.